Ireland let South Africa off the hook in final Test 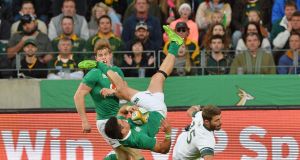 There have been few more courageous Irish performances in a season-ending tour to one of the Southern Hemisphere big guns, not just physically but in ambition too as they rebounded from blow after blow.

So there they were, in the last play of a 17-Test, 52-week season, still hammering away at the Boks’ line and coming within one pass of having a conversion to clinch an historic series win. Alas, that only made another that got away more painful.

Despite being down to a near skeletal backline, with Keith Earls effectively a fifth choice fullback, no matter what way you dress it up the nagging feeling that Ireland were the better team on the day and over the series will never go away.

The pack were mighty in every aspect bar the scrum, which yielded the Boks four penalties, two indirect penalties and a couple of three-pointers. The old reliables Jack McGrath, Devin Toner and Jamie Heaslip (for the 11th Test in a row) gave it the full 80, and how, in almost error free performances, while Iain Henderson relished the full-on contest and Jordi Murphy carried and worked athletically and energetically.

They largely kept the Boks’ maul at bay, and the breakdown work from one to 15 was typical of a Joe Schmidt team, recycling the ball 136 times. The Boks, who brought little else except a couple of trademark straight running power plays, plenty of the aerial stuff and a much improved defence, recycled 56 rucks.

Conor Murray pulled the strings on the day of his 50th cap, while the Ulster axis of Paddy Jackson, Stuart Olding and Luke Marshall probed skilfully with their creativity and footwork. Olding benefitted hugely from his previous outing, really seeming to believe he belonged this time, while Marshall took his try well and should have laid on another in a decidedly mixed bag of a performance.

Keeping the ball in hand, going through set plays that largely out of circumstances had been kept under wraps, the wonder is how they didn’t win. Ireland had 68 per cent possession and 73 per cent territory, and did plenty with it, beating 25 defenders (to the Boks’ five) and making nine line breaks to one, while carrying 405 metres to 154

So much, again, for that hoary old chestnut about Ireland not playing any rugby. But you need a platform, and whereas they only had five lineouts, of which two produced requisite ball to run off, on Saturday they had 15 throws, securing all but one of them.

“Yeah, exactly, you need the platform and we got a couple of great over the advantage line carries from the lineout that we constructed the try from and that we got great go forward from and got pressure on them,” said Joe Schmidt, before hinting at the frustration with which the Boks were allowed to slow down or kill ball. “I felt there were a few times it was very hard to get the cleanout with the tackler there and there’s a few things that we’ll look back at because there’s always a few frustrations and they did pretty well to do what they did.”

This was certainly true of the last play, when Earls was tackled ball and all by the on-rushing Faf de Klerk to prevent moving the ball on for the unmarked Matt Healy on his outside and the hooter having sounded. De Klerk never rolled away and Franco Mostert went off his feet, yet Glen Jackson signalled the end by awarding the home side a penalty against Earls for holding on.

If O’Halloran had merely landed on his shoulder, how come he needed a head injury assessment? He passed it, as thankfully did Marshall later on as Earls returned to fill his third position of the day at outside centre. But the rib injury which O’Halloran sustained in that 11th-minute incident forced him off at half-time, thereby making Matt Healy the fifth debutant of the tour.

If rugby is going to judge this incident based on the initial outcome more than the actions then it will encourage more players to feign injury. Le Roux was banned for a week by Terry Willis, the same judicial officer who handed out a one-week ban to CJ Stander.

So therefore this was another red card offence.

That last attack had been one of 20 phases. There’d been another of 22 entering the last five minutes after Earls instigated a counter-attack which saw Sean Cronin make a 40-metre break before Rhys Ruddock was pinged for going off his feet.

Two hard-earned and gilt-edged try-scoring opportunities had been left behind, as first Marshall failed to convert his break and two on one into a try when delaying his pass, which drifted forward, to Earls.

In the second-half, Jackson had a four on two after superb carrying by CJ Stander and Jordi Murphy led to Ireland setting up a maul under the posts. He could possibly have gone himself. He should most probably have passed short to Olding. A grubber through would have done it. But he opted to float a long ball to Earls and Andrew Trimble, and that man de Klerk leapt for a one-handed intercept at full stretch.

As Schmidt admitted, Ireland’s inexperience showed at times. “The younger guys have made a great investment and the success will be made in the longer term but any investment you’ve got to be a little bit patient with and I’m not going to rip into a player who made a poor decision or didn’t execute something under Test match pressure because I want them to keep going, keep gaining confidence that they can cope in the arena that we’re in. To be honest, over these three Tests they should have learned that they can.” nSouth Africa fullback Willie le Roux received a one-match suspension yesterday after being cited for a dangerous tackle in Saturday’s over Ireland. Le Roux appeared at a hearing after the challenge on Ireland’s Tiernan O’Halloran in the 11th minute which caused the Irish fullback to land heavily on his upper body and head. Le Roux is suspended for the next Super Rugby match for the Sharks away against the Lions in Johannesburg next Saturday.

Golf in Level 5: Clubs still waiting to hear if they can remain open

1 Golf in Level 5: Clubs still waiting to hear if they can remain open
2 Hugo Keenan could start in changed Ireland team against Italy
3 Wijnaldum attacks ‘stupid’ Pickford tackle on van Dijk
4 Gerry Thornley: After 32 weeks the Six Nations is back up for grabs
5 Dan Martin stakes podium claim on opening stage of Vuelta
Real news has value SUBSCRIBE