Ireland formally launches its bid to host the 2023 Rugby World Cup on November 15th at the Aviva Stadium in Dublin. Video: Bryan O'Brien 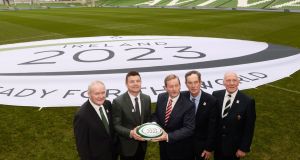 At the bid announcement for the 2023 Rugby World Cup in the Aviva Stadium were (from left) Northern Ireland Deputy First Minister Martin McGuinness, Brian O’Driscoll, Taoiseach Enda Kenny, chairman of the oversight board Dick Spring and president of the IRFU Stephen Hilditch. Photograph: Cyril Byrne

Down to the last three, now the bartering begins. A year to the day from Tuesday’s bells-and-whistles launch at the Aviva Stadium, the World Rugby Council will conduct its final vote on whether the 2023 World Cup will be held in Ireland, France or South Africa.

As things stand the council has 37 votes, meaning that the target for the three rival bids is 19 votes. None of the three bidding countries can vote, while of the remaining tier 1 nations, all bar Argentina (which has two votes) have three votes each.

The six regional associations: Oceania, South America, North America, Africa, Europe and Asia, have two votes each, while the remaining five unions have one apiece, namely Canada, the US, Japan, Georgia and Romania.

“There are no votes in the bag at all,” said IRFU chief executive Philip Browne on Tuesday. “The reality is that we’ve just launched and it’s up to us to go out over the next 12 months and persuade people of the value and benefit of our bid to world rugby. Yes, we’ve started our conversations. We’ve started our conversations in Chicago with the Canadians and the US, we met people yesterday in London and we’ll be meeting more people between now and Christmas, and after Christmas.”

“So the hard work really starts now in terms of actually putting the detail on the bid and then having those conversations, trying to persuade people that our bid is of value to world rugby.”

At face value, Ireland appears to have a reasonably good chance, albeit in a highly competitive three-way fight. Given all three contenders successfully prove to Rugby World Cup/World Rugby that it can meet the basic criteria, then it will come down to which one they believe will province a commercially successful tournament, with sold-out stadiums and a tournament that is in keeping with the kind of event World Rugby aspire to.

Ireland’s bid has novelty value, and would be very much in keeping with New Zealand’s hosting of the 2011 World Cup. France has the stadiums, undoubtedly, and has experience of running major sporting events, including the 2007 Rugby World Cup. However, to return there just four World Cups later is hardly spreading the tournament globally. Furthermore their bid is perhaps compromised by France also seeking to host the 2024 Olympics, which is likely to be more of a government priority, all the more so after failing in 2008 and 2012.

South Africa also has the stadiums and experience of running major global events, including the 1995 Rugby World Cup and the football World Cup in 2010. But their economy is in difficulty, security would be an issue and politically, their government and the SARFU are at loggerheads.

A 2023 World Cup in Ireland would begin with an opening match on September 15th, with the final on November 4th. The GAA are currently looking into any restructuring of the All-Ireland Championships which may arise from that. The opening match need not necessarily take place in Croke Park, and could instead be accommodated in the Aviva Stadium. Croke Park would host the semi-finals and final, with at least one of the quarter-finals held outside Dublin, in either Cork or Belfast.

The bid contains 12 prospective venues, of which eight are GAA grounds, along with the Aviva, RDS, Kingspan Stadium and Thomond Park.

This dozen would be whittled down to eight or 10 by the World Rugby Council. Those dozen venues did not include either Semple Stadium in Thurles or the Gaelic Grounds in Limerick, on foot of the feasibility study conducted by WilsonOwens who were responsible for the 2012 London Olympics, the Rugby World Cups of 2015 in England and 2019 in Japan.

“They looked at all the stadia,” said Browne. “They looked at the Gaelic Grounds, but ultimately it was boiled down to a shortlist of 12, which, in their experience, would be the best mix.”

It is understood that “access”, specifically the combination of road and public transport, counted against Semple Stadium, while the presence of Thomond Park in Limerick facilitated a greater spread of venues rather than having two venues in that city.

Browne would not reveal the cost of the projected remedial work required on the venues, as it would divulge this to their rivals, but that the cost of upgrading floodlighting, big screens, media centres, hospitality, additional seating et al would be funded from within the budget, and specifically ticket sales. The target for ticket sales is two million, which would not be far behind England’s 2.2 million tickets sold.

According to another feasibility study conducted by Deloitte, a World Cup in Ireland would bring in 450,000 people and would be worth €800 million to the economy of the island, North and South. The Dublin Chamber of Commerce actually estimates that figure could reach €2 billion.