Guy Noves: ‘The players won, not the coaching’ 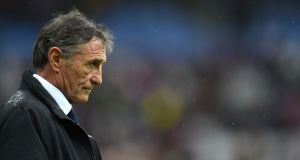 France head coach Guy Noves insisted there was more to Les Bleus’ victory over Ireland than simply the use of delaying Slimani’s and Ben Arous’ entrance until the second half.

The two props entered the game in the second half, allowing France to take over the set-piece battle in Paris.

The France boss admitted his pack “made the match tilt” with the sequence of five-metre scrums and penalties before Medard’s try, but refused to base the entire victory on that plan.

“I don’t want to hear that changing the props was the right strategy,” said Noves.

“What we were doing from the 30th minute to the end, that feels good, that was the right way.

“The players really focused hard to rectify the mistakes from last week.

“The victory depends on the choices made by the players and especially the captain, who decided to take that touch at 9-3 instead of kick at goal.

“They took the touch, there was that scrum, and the beautiful try they scored.

“The players won, not the coaching.

“The scrum was pivotal for the victory. The referee had trouble with the decision. We expected a yellow card.

“But the French forwards made the match tilt at that moment, allowing the backs to score that try.”