Greig Laidlaw calls on Scotland to change the tune 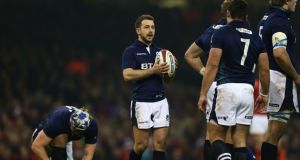 Scotland captain Greig Laidlaw: “We have to simply concentrate on the 80 minutes that’s in front of us, do one thing well, move on to the next job and do that well and then we’ll get the right result.” Photograph: Michael Steele/Getty Images

In a tournament so parochial by nature, the Six Nations mood music will always strike a familiar tone, but for Scotland it seems to be stuck on repeat. Nine defeats since Duncan Weir’s last-gasp drop-goal sealed a jittery win in Italy two years ago mean Vern Cotter is yet to taste victory in the competition. The optimism created by Scotland’s World Cup campaign is also eroding after frustrating defeats by England and Wales.

Put simply, Scotland must beat Italy today. For four of the past five years this fixture has condemned the losers to the wooden spoon and the outlook will be similarly bleak for the vanquished in Rome. A brief comparison with last year hints that little has changed for Scotland. Twelve months ago a seven-point loss to France was followed by a 26-23 defeat by Wales while this year the margin against England was six and in Cardiff four, but fears of a continuing pattern do not chime with the positivity in the Scottish camp.

“We have to simply concentrate on the 80 minutes that’s in front of us, do one thing well, move on to the next job and do that well and then we’ll get the right result. We need to look after the ball, we need to carry strong and keep speed in the play. If we do that, we’ll get on the right side of the referee and we’ll be in a strong position.”

There is little doubting Cotter, who restores Tim Visser to the wing in Scotland’s one change, has had a positive influence yet costly mistakes are at the root of the narrow defeats. Had Finn Russell found Stuart Hogg, rather than aimlessly kicking the ball away, things may have turned out differently against England. Similarly, John Hardie’s spill in the Welsh 22 was costly in Cardiff.

“They were just basic errors and they’re game-changers,” said former outhalf Craig Chalmers, part of the last Scotland squad to win the competition in 1999. “It’s poor calls and poor execution and it’s losses by a single score. It’s a win-at-all-costs game. It doesn’t matter how we win it. Performance goes out the window, we’d take 3-0.

“It’s very similar to last year. Last year, we played France, we played Wales, two games that we could have won. And looking back to England and then Wales this year, there were chances but we didn’t take them and that’s been the problem for a while. But Italy are dangerous. You used to know what they were going to do but now they’ve got a bit more about them, more flair, more invention and they ask more questions of you defensively.”

“We lost against France when we could have won. Now we are in a bit of trouble after the England match because we conceded 40 points,” said Campagnaro, who starts in a team featuring four changes with Kelly Haimona selected at outhalf.

“We have to think about being competitive, like we were against France. Two years ago against Scotland it was really close, then we won in Murrayfield but we have to reset and start again.” Guardian Service