Wales getting over gain line will worry Joe Schmidt, with France also opting for power 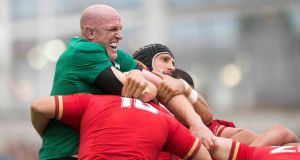 Paul O’Connell tries to hold up a Welsh maul at the Aviva Stadium. Photograph: Billy Stickland/Inpho

The theatre superstition has it that a bad dress rehearsal makes for a good opening night, so Joe Schmidt and the Irish squad will not be panicking after one defeat. Not only does a team often learn more from a defeat than a win, but it is preferable to lose a preparatory game than any of the real things, and it may even be no bad thing that some of the optimism has been deflated, along with losing second place in the world rankings.

It’s also worth noting that different teams have different final dress rehearsals, as well as different opening nights. For England and Ireland, next Saturday is their final warm-up game before the tournament, whereas last Saturday was Wales’ final preparatory game. Hence, Warren Gatland and Wales were in greater need of a hit-out for his frontliners, and a win.

Italy’s 48-7 defeat to Scotland confirmed they are more bereft of an outhalf than ever before and with a clutch of veterans now surplus to requirements, the scale of that defeat for Ireland’s third opponents leaves them at a low ebb.

For sure, Schmidt will want his frontline team to be hitting their stride for that game, but in essence their World Cup revolves around the group finale against France. That is six weeks away.

By contrast, in the pool of sharks, Gatland will probably wrap his frontliners in cotton wool until their seismic second pool game against England in four weeks. After that they will encounter Fiji and Australia so their elbow room for resting players looks considerably reduced.

Stuart Lancaster’s and England’s needs are even more pressing. As World Cup hosts, they will be under even more pressure, and thus will be more desperate, to win this Saturday at Twickenham. Losing a second successive game – including one against little old Ireland at their citadel – would send tremors through their ranks.

Furthermore, England will be under more pressure than most to hit the ground running, given they host Fiji on the opening night at Twickenham in just two weeks’ time. Fiji have just won the Pacific Nations Cup, beating Samoa 39-29 in the final and, having assembled their strongest World Cup side ever, look like being the most dangerous of the Pacific Island floaters.

Never mind results between England, Wales and Australia deciding Pool A, given the bonus point system, the heavyweights’ games against Fiji could go a long way toward determining the final pecking order.

England are possibly disadvantaged by playing the Fijians first up, as the nature of a World Cup opener against the hosts demands that Fiji put their best foot forward. It could even inspire them, à la Tonga four years ago against New Zealand when the 41-10 margin hardly conveyed how much the All Blacks were made to work for their scores.

Nonetheless, what must be of some concern from an Irish perspective and perhaps even for the World Cup in general, is the degree to which Wales’ win in the Aviva was based on their physicality across the gain line. It certainly looked as if their extensive focus on physical fitness has reaped a reward.

And the same will be true of England, who have placed an emphasis on physical power judging by their squad selections, and France. Even before they took the field at Twickenham and Stade de France, reports were emanating from France that les bleus may not be the most creative French team to attend a World Cup, but they would be the biggest, fittest and strongest. Everything about their two showings against England subsequently confirmed as much.

In this too, the more full-on warm-up games may well turn out to be precursors of the rugby in the World Cup whenever the heavyweights collide, as opposed to when they are routing teams from the less developed rugby nations.

Once more Warren Gatland was a tad ungracious about the way Ireland play, and his contention that Wales can be guilty of playing too much rugby by comparison would be disputed by some, bearing in mind the Welsh kicked the ball out of hand 41 times (and Ireland 33 times). Such was the defensive organisation, filling the field by not committing unduly to rucks and most of all the line speed, that the halves often had no alternative.

Being in possession was often a liability, not least as Ireland were regularly forced to recycle from behind the gain line, and one can readily understand why Joe Schmidt made such reference to the penalty count. As with the France-England game the week before, nothing can have a more profound effect on games than the penalty count going heavily against one team for a while.

Four years ago, the world governing body were hot on spear tackles – which conceivably may have decided the destiny of the William Webb Ellis trophy as much as anything else given Sam Warburton’s red card in Wales’ semi-final defeat. This time, the major concern seems to be players clearing out around the neck area – cue that harsh penalty against Paul O’Connell.

Better this was hammered home to Ireland last Saturday rather than six weeks’ hence. But World Rugby could do so much more to free up space in the game by enforcing the hindmost foot offside line.

The touch judge, Dave Pearce, flagged O’Connell for that supposedly high clear out, but only once were Wales pinged for offside, and that was at Pearce’s behest. Why on earth touch judges aren’t employed more to police that law beggars belief.

At a stroke it could do more to help the game than any diktats about clearing out at ruck time. gthornley@irishtimes.com