Gatland rings the changes as Bowe returns for Lions

Five changes to line-up for second test against Australia, O’Brien and Murray on bench 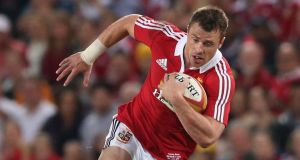 Tommy Bowe has recovered from injury to be named for the second Lions test against Australia. Photograph: David Rogers/Getty Images

In the fall-out from the first test it was the woebegone Wallabies who seemed in greater need of overhaul but whereas they’ve made just two enforced changes, Warren Gatland has made five, only two of which forced by injury. The net effect sees the return of Tommy Bowe after surgery on the broken hand he sustained against the Reds three weeks ago, while Sean O’Brien and Conor Murray are promoted to the bench.

As expected, Mako Vunipola and Geoff Parling replace the injured Alex Corbisiero and Paul O’Connell, while Dan Lydiate has been promoted to the backrow, with Tom Croft dropping to the replacements as cover for the second row as well as backrow, alongside O’Brien.

With Bowe replacing the try-scoring Alex Cuthbert, who also drops to the bench, the one surprise is the omission of Mike Phillips, who has not been able to train fully for the last four weeks with a knee problem. This sees Ben Youngs promoted to the starting line-up with Murray, Ireland’s first scrumhalf on a Lions tour since 1980, on the bench and in line for his first test cap.

“Mike Phillips was fit and available,” explained Gatland after the team announcement. “He has had problems with his knee. It has been sore and he hasn’t been able to take a full part in training. The decision was to rest him for this week and he is potentially an important component for next week. We wanted to make sure, given the quality of the number nines we’ve got, all of whom have done a great job, he is 100 per cent fit for next week by giving him a few days off.”

It is a remarkably unexpected return for Bowe, of whom the coach said: “It doesn’t look good for Tommy” after he suffered a broken hand in the win over the Reds just three Saturdays ago. He had a plate inserted in the hand the following morning, and has made it back inside three weeks.

“Tommy is obviously quality and he brings a lot of experience. He has been a fantastic player for both Ulster and Ireland and he has made a fantastic recovery from injury. The medics have done a brilliant job in getting him back up and fit. He has slotted in really well this week.”

“Credit to the surgeon who performed the operation because there were other surgeons who said it was a six to eight week injury. He was confident that if he looked after himself Tommy could be back in three weeks. He has got a hurling glove he is wearing for a little bit of extra protection, but he has worked hard to get back.

That Gatland has also revamped his backrow with the inclusion of the big-tackling Lydiate, undoubtedly one of the coach’s favourite players, should stiffen up the fringes of the Lions’ defence, if potentially reducing their options at lineout time and pressure on the Wallabies’ throw.

“This is a do-or-die match for Australia and it’s going to be a real battle out there. We’ve decided to add a little bit more physicality to our side up front. Dan Lydiate brings that and then we have the explosiveness of Tom Croft and Sean O’Brien to come off the bench. We are really happy with the quality we have on the bench.”

“It just shows how strong the squad is and that we have a huge amount of competition. One or two changes were forced on us, and we’ve got a couple of players coming back from injury,” said Gatland.

“I don’t know who made that thing up about not changing a winning side – it is about picking the best team to do a job for us. We can win this series by winning on Saturday and that’s where our whole focus needs to be. The last thing we want to think about is being one-all and having to play another game in Sydney. Everything for us is about Saturday night.”

To that end, Gatland met with referee Craig Joubert yesterday to highlight his concerns about the high penalty count against the Lions last Saturday in Brisbane, especially in the tackle area.

“We’ve had a good meeting with Craig Joubert and we’ve got some clarity on the break down, which was good. The scrum started well, but we’ve got to ensure that we are accurate for the 80 minutes. We gave away one or two too many penalties last week, so our discipline needs to be really strong as well.”

1 Winds of change as Ireland name a refreshed team, picked on form
2 Gordon D’Arcy: If Farrell can tap into our self-worth, we’re all on a winner
3 Who is Caelan Doris? Meet Ireland’s newest rugby star
4 Nike Vaporflys won’t be banned but regulations will tighten
5 Big paycheques lure the world’s best to Saudi Arabia
Real news has value SUBSCRIBE