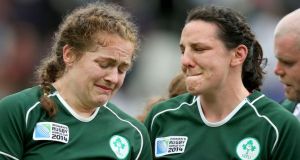 While the male Ireland under-20s squad (still no female equivalent) were on a charter flight, the women were snookered by rush hour Paris traffic and missed their connecting flight. From another airport.

They got an overnight train to the deep south, had a wee siesta before taking the field against the behemoth French. They lost by a point. As people ranted and raved about this debacle, few failed to notice that. A single point.

Within a year they did the Grand Slam. And they did it fair and square. Then they attempted to defend it with honour, holding their own at Twickenham and back down in Pau, before disappearing out of view to prepare for the ultimate challenge; New Zealand in the World Cup.

Something special happened on August 5th. It came from a magical well of courage, seriously good coaching and iron-clad belief. They beat the Black Ferns. Again, beat them fair and square.

The world champions England, who beat Canada 21-9 in yesterday’s final, overawed them in the semi-final with the physicality of fully fledged professionals.

There was no way Ireland could recover in four days to beat France in Paris but they kept pace until the 80th minute before losing 25-18. Fourth in the world.

“How they do it at times I don’t know,” said outgoing coach Philip Doyle. “They are intelligent players. We are still lacking in skills and strength but, for where we have come from in four years, it is massive.”

The last word must go to Fiona Coghlan. After 13 years and 85 caps, she retires the most successful captain in the history of Irish rugby.

“It’s a huge commitment,” said the 33-year-old school teacher, understandably teary-eyed. “You are away every weekend, mornings and nights, but I loved every minute of it.”

“I don’t know if I will go coaching but I have to give something back to the game.” I think she’ll find the game in this country owes her more than she owes it.

1 Athletics Ireland agree to stage national championships
2 Ken Early: PSG would be sensible final move for Ronaldo
3 Rory McIlroy: Maybe I’m just not as good as I used to be
4 My sporting disappointment: Jimmy White and the elusive World Championship
5 The Offload: Joe Schmidt the influencer is due a second act
Real news has value SUBSCRIBE