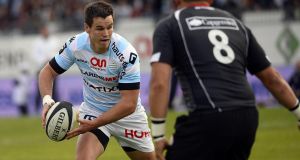 Irish outhalf Jonathan Sexton in action for Racing Metro 92. It is also believed Toulon and Racing Metro 92 were offering in the region of €900,000 to keep Sexton in France. Photograph: Getty Images

Jonathan Sexton’s commercial agreement with Denis O’Brien, which played a significant role in bringing the Ireland outhalf back to Leinster next season, confirms the new IRFU strategy of keeping hold of their most precious commodities.

Basically, the provinces can now top up central contracts with private funding.

The first deal of this kind was brokered last January by Jamie Heaslip’s agent, Damien O’Donohoe of Ikon.This was allowed to avoid the loss of another marquee Irish player following Sexton signing for Racing Metro 92.

Heaslip was able to spurn the advances of Toulon while maintaining his status as the highest-paid player in Irish rugby when Leinster chief executive Mick Dawson arranged for him to become a Bank of Ireland brand ambassador.

This saw Heaslip sell his image rights to secure a contract believed to be worth close to €600,000, presuming the number eight plays a certain number of games each season and achieves other targets, aligned to team success.

Approximately 10 per cent of Heaslip’s salary is funded by Leinster’s main sponsor.

Dealing with the IRFU

Maurice Dowling, the IRFU’s director of human resources last season, was previously the first point of contact on contract negotiations. This is now part of Nucifora’s remit.

When contacted yesterday, a spokesman for the billionaire refused to provide The Irish Times with any comment.

Sexton’s position as brand ambassador would also see him in the same salary bracket as Heaslip, although he also has a lucrative agreement with Adidas. Heaslip is also a brand ambassador for Guinness.

“I think at Munster and Ulster there’s private money involved in terms of the supporters clubs, which are being used to fund the academy developments, certainly in Munster. I think we are looking all the time at seeing how we can renew our business model, how can we not stand still basically. We have to keep moving forwards.”

Regarding the union competing with the wealthier French clubs, Browne said: “Well, we have to look at our business model number one. Is it possible to bring in private money or generate other sources? We are working with the provinces looking at all the options open to us.”

Interestingly, Seán O’Brien and Paul O’Connell re-signed IRFU contracts last season without additional funding from their provinces or private money. This is probably because of O’Brien’s injury profile and O’Connell’s age.

Sexton, now 29, currently has no such concerns as he joins the list of Giovanni Trapattoni, Martin O’Neill and Roy Keane, all of whom have or had their salaries buttressed by O’Brien.