Pat Lam expecting a hot reception for Connacht in Parma 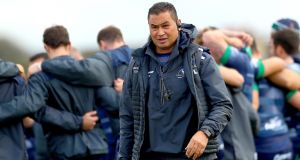 Pat Lam: “ we are under no illusions that of all the visits we have made to Parma this will be the biggest challenge that we have faced.”

Connacht-bound outhalf Marnitz Boshoff will complete his routine medical examination in Galway this week before taking part in his first training session with the Pro12 champions.

The 27-year-old Springbok, who was signed in March from Super Rugby Johannesburg-based club, the Lions, in March, will deepen the experience of Lam’s young side.

After last Saturday night’s thrilling win over Toulouse, Connacht are adjusting to the firm-favourites tag as they prepare for Sunday’s game against Zebre in Parma.

Tiernan O’Halloran, who provided an immense attacking threat in that win over the French side, has been ruled out of the Zebre game with a recurrence of a knee injury.

Medics are optimistic he will be available for the PRO 12 game against Leinster in the RDS on the last Saturday of the month.

On the bright side, the return of Quinn Roux to training will deepen Connacht’s scrum options while centre Peter Robb, sidelined with a hip injury, came through Wednesday’s morning session in the Sportsground.

The death of Anthony Foley has naturally overshadowed all on-field events across Irish rugby this week.

For Pat Lam, it has been a mixed week. He received an honorary doctorate from NUIG on Monday and has been preparing for the Zebre game since Sunday but the bereavement suffered by the Foley family and Munster and Irish rugby has constantly been his mind and those of his players.

Lam and a number of Connacht players will travel to pay their respects on Thursday.

“Everything that has been said: we are all still in shock. But everyone has special memories of him as a rugby player,” Lam said.

“But all those who were fortunate to know him away from rugby have completely fond memories of him. It is going to be a tough time for the family and we will see a lot of emotion for the next few days but right through the season. He won’t be forgotten.”

Despite being Pro12 champions, Connacht are rarely required to cope with the burden of favouritism. Sunday is the exception. The 82-14 thrashing handed to Zebre by Wasps in their opening pool two game makes the Italians more dangerous, in Lam’s view.

“We have all been in those examples. We got hammered by Edinburgh and went the next week and beat Toulouse away. Zebre: I watched the game live and hadn’t bothered watching it again because I could tell: body language. We know those players well. We have played them probably more than anybody. I was at the launch of the Champions Cup and every team was asked about their goals.

“Zebre made it very clear that their goal was to win one game in the Champions Cup. Now when you consider their best chance is at home and then you go: Toulouse, Wasps, Connacht, it doesn’t take a rocket scientist to work out which game they are targeting.

“So we are under no illusions that of all the visits we have made to Parma this will be the biggest challenge that we have faced.”

When the sides last met in September, the match was abandoned after a rainstorm. For once, Galway was not to blame: the game was in Parma and Zebre had established a 22-10 lead at the break.

Connacht were still feeling their way into the season then but Lam anticipates something closer to that encounter than to the feeble resistance Zebre mounted against Wasps.

“They have taken a hammering this week from outside and from their own supporters. And you know as a rugby player there is only one way they are going to respond to that.”