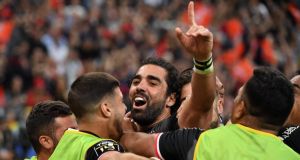 Two tries by Yoann Huget proved the difference as Toulouse capped a superb season by beating Clermont Auvergne 24-18 in the French Top 14 final in Paris on Saturday to lift the trophy for the first time since 2012.

The winger crossed the line in the 28th and 55th minutes to give Toulouse a deserved victory, although five Greig Laidlaw penalties meant the outcome was never a formality.

Toulouse had finished top of the regular season table with a record points tally and reached the European Champions Cup semi-finals while Clermont finished second having scored more points than any other side during the 26-match campaign.

Pre-match billing spoke of a “dream final” and a 79,000 crowd in the Stade de France were treated to a grand occasion even if the game failed to match the blockbuster between the sides in April when Toulouse won 47-44.

Toulouse will not care, though, as they claimed their 20th French championship.

Clermont were in front inside two minutes as Scotland scrumhalf Laidlaw kicked a penalty but it was cancelled out by one from Toulouse fullback Thomas Ramos.

Penalties were traded again before Toulouse pounced from a scrum and Cheslin Kolbe accelerated into space before feeding Huget who went over to give his side an 11-6 lead which was narrowed before half-time to 11-9 by another Laidlaw kick.

Toulouse ended the half a man down after Kolbe was yellow-carded but Clermont were unable to benefit and Ramos booted another penalty in the 49th minute.

Again the trusty Laidlaw replied as Clermont refused to be distanced. Toulouse finally got breathing space when Huget finished off a fine move and Ramos converted to put Toulouse 21-12 in front.

Laidlaw narrowed the gap with a 40-metre kick but Ramos consolidated Toulouse’s lead with his fourth successful penalty.

With Laidlaw off the field Camille Lopez cut the gap to six points but Clermont could not find the converted try they needed to steal victory.