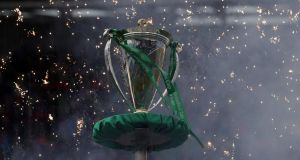 Clubs from the French and English leagues will seek to create a new European competition as negotiations to secure the future of the Heineken and Amlin Cups appear to have broken down beyond repair.

With the ERC, the organisers of the Heineken Cup, due to meet in Dublin tomorrow both Premiership Rugby in England and the LNR in France issued statements on behalf of their clubs outlining their intention to form a new tournament for their own teams.

Teams from other European countries will also be invited to take part.

“Despite numerous meetings between the stakeholders over the last year, the last of which was in May, discussions have been unsuccessful and the clubs can only conclude that negotiations on any new European agreement have now ended,” a statement released by Premiership Rugby read this afternoon.

“The English and French clubs have proposed the formation of two new, stronger competitions of 20 teams each, based on the principles of qualification on merit from each league, the inclusion of teams from all six existing countries and the expansion into new markets. These proposals could form the basis of future competitions.

“However, given the importance and urgency of the current position, and the reconfirmation that the French clubs will not participate in any competition unless it includes the English clubs, the clubs have now asked Premiership Rugby to take immediate action to put in place a competition for 2014/15 to include the French and English clubs but which will also be open to teams from other countries.”

The English and French clubs had already served notice they will withdraw from the competitions when the existing participation agreement ends in May 2014.

It was thought that stance could shift if changes were made to the sporting and commercial elements of the two tournaments, forcing every club to qualify, ending the right of automatic entry currently enjoyed by Scotland and Italy.

The plan proposed by Premiership Rugby would reduce the Heineken Cup to 20 teams with four teams dropping into a strengthened Amlin Challenge Cup.

The Rabodirect PRO12 clubs, including the four Irish provinces, have argued the Heineken Cup has to be representative of the whole of Europe and the only way to ensure that is by guaranteeing entry.