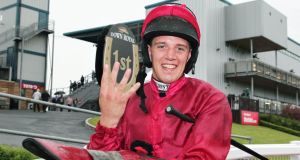 Davy Condon has been forced to retire after his fall during the Grand National. Photograph: Inpho

Davy Condon has been forced to retire from the saddle due to a spinal injury.

Condon was riding Portrait King in the Grand National at Aintree when he fell at the third-last, leaving him with a spinal concussion.

It was the second time within a year that he suffered a similar injury.

Condon had resigned himself to the fact he would be out of action for a lengthy period of time but after seeing a specialist on Wednesday he has been advised to call time on his career.

Dr Adrian McGoldrick, chief medical officer of the Irish Turf Club issued a statement on behalf of Condon which read: “Davy Condon suffered a spinal injury in a fall during the Grand National at Aintree.

“This was on the background of a previous spinal concussion from which he had recovered fully and had been passed fit to ride by our consultant neurologist.

“Davy was reviewed yesterday by Dr Brian Murray, Consultant Neurologist, on behalf of the Turf Club.

“Dr Murray has recommended that Davy retire from horse riding, be it professional or recreational, due to the risk of further spinal injury.

“Davy has been referred by Dr Murray for a neurosurgical opinion as he has an ongoing disc lesion in his neck.

“Davy has fully accepted the medical advice and will be liaising with the Irish Jockeys’ Trust with a view to future career options.”

Condon’s best days in the saddle in recent years came when riding for Gordon Elliott and the trainer was quick to take to Twitter to pay tribute to him.

“Very sad to say that Davy Condon has been forced to retire from racing due to injury,” said Elliott.

“Davy has been an integral part of the team and has ridden some of the biggest winners I have had in my short career.

“Davy will not only be missed by myself, he is a very popular person in the industry and here at Cullentra.

“We all wish him the very best of luck with whatever he chooses to do next with his career and if we can help in any way, we will not hesitate to do so.

“Thanks for everything Davy, we’ve had some great memories together.”

Condon’s last major win came at Ascot in The Ladbroke on the Elliott-trained Bayan, which was only his third ride back since the first bad back injury he suffered in August.

Condon’s retirement comes the day after Robbie McNamara said he is feeling “great and optimistic” as he continues to recover from serious injuries suffered in a fall at Wexford earlier this month.

The jockey was due to partner last year’s Cheltenham Gold Cup winner Lord Windermere in the Crabbie’s Grand National at Aintree, but suffered multiple injuries when coming to grief in a fall from Bursledon in a handicap hurdle the previous day.

McNamara remains in the Mater Hospital in Dublin and despite still having no feeling in his legs, he was able to leave his bed for the first time to enjoy the sunshine on Tuesday.

Speaking in the Final Furlong Podcast, McNamara said: “I’m feeling great and I’m still optimistic. I’ve no feeling in my legs at the minute, but it’s early days.

“My back is badly battered and bruised and there’s a lot of swelling. I’d be hoping when all that swelling and bruising goes down, some of the nerve damage might repair and some feeling might come back.

“I can’t do a whole pile as I broke eight ribs and cracked six vertebrae as well, so I can’t do anything very strenuous.

“There’s plenty to keep you occupied, I’m enjoying my days and I’m in great spirits. I’ve no negative thoughts whatsoever.

“It was my first time out of the bed (on Tuesday). It was a surprise I was allowed to go outside, it went grand and it was a beautiful day for it.

“My mother and father were there and it put a smile on their faces, which is lovely to see as it hasn’t been easy for them either.”