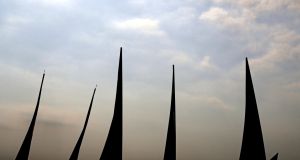 Dublin Bay has delivered fresh to strong winds all week and the westerly direction results in frequents gusts and direction shifts.

Having found his stride back on home waters, Irish Olympian Mark Lyttle goes into Friday’s penultimate day of the Laser Masters World Championships in the lead of the Grand Masters division of the 301-strong event.

Having qualified for the series through the UK where he now lives, the Atlanta ’96 veteran is racing under his GBR sail number though remains the clear local favourite for the event.

An 11th place in the opening race on Sunday followed by a fourth and then another mixed day on Monday meant he was just inside the frontrunners of his 61-boat division but shy of the podium for the first two days.

However, that all changed on Tuesday.

Two emphatic race wins bounced him into the overall lead just before the rest day.

When sailing resumed, he again had a consistent day on Thursday and posted a third and fourth after a challenging day on the water.

Dublin Bay has delivered fresh to strong winds all week and the westerly direction results in frequents gusts and direction shifts.

Lyttle wasn’t the only Irish sailor to have a good day on the water and in the Apprentice Master class, Damian Maloney, Pete Smyth and David Quinn delivered a first, second third line-up for the eighth race.

In the Radial Legends class for sailors aged over 75 years, Cork’s Denis O’Sullivan had his best day delivering two second places and picked up ground to move to sixth overall.

A second and a third for Christopher Boyd in the Radial Great Grand Master brings him to fourth overall and the four remaining races will be needed to close the 11-point gap to a podium finish for the week by Saturday’s prize-giving.

Meanwhile, Tom Dolan from Kells, Co Meath had a brief celebration yesterday after he finished the third leg of the Solitaire du Figaro Race as stage winner of the rookie division.

Racing single-handed on his 10-metre Smurfit Kappa entry, he suffered a setback in the opening stage of the annual race when he was dismasted.

“Morale in the Team Dolan camp was on the floor so this result is just what we needed,” he said yesterday.

However, the two-hour time penalty applied on top of the last-placed finisher in that opening stage means he is too far behind in the overall classification to improve his current 32-place overall as the final stage that concludes on Friday evening is a 24-hour sprint.