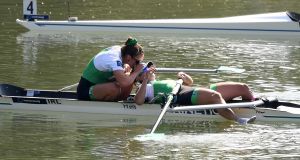 The Ireland high performance director for rowing is determined to continue planning for the Olympic Games in July.

Antonio Maurogiovanni has changed the date of the Ireland trial, moving it the coming week to April 6th-12th to allow the lightweight rowers who came back from Spain to complete their two weeks of isolation and have time to train at the National Rowing Centre.

But apart from this, Maurogiovanni hopes to go on with the plans for Tokyo 2020 with as little change as possible for his squad, with its four qualified boats. He will try to replicate as best he can the intensity of World Cup competition with races within the group at similar times to when crews would have competed.

Two Ireland boats - the women’s four and lightweight women’s double - were set to compete at Olympic qualifiers, now abandoned. What is the fair way to allocate those places? “That’s the million dollar question,” Maurogiovanni says.

“To be honest, I’ve no idea, because this is a unique case.” He says he does not want to get involved in the “rumour” or “gossip” which surrounds these decisions.

Maurogiovanni hails from Bari, deep in the south of Italy, and his parents, brother and sister and extended family still live there. The awful encroachment of Covid-19 has had personal consequences. “It is quite sad. My thoughts are with all my relatives. I cannot go back, so I can only phone.”

His wife and more immediate family in Australia are also out of direct personal contact.

The positive attitude of the rowers at the National Rowing Centre has been encouraging. “I’m very lucky to have such a group. They are very, very motivated and very responisble,” he says. “It’s absolutely remarkable.”

He hopes that they “keep this momentum, even if it is difficult at the moment”.

The Ireland Under-23 and junior group, who have been excluded from the NRC in order to lessen the chances of the Olympic squad catching the virus, should continue to stay fit and focused, Maurogiovanni says. Right now their World Championships is still set to go ahead.

For the Olympic squad, the message is the same.

“We have to base everything on certainty, and what is certain at the moment is that the Olympics are still on.”