Report on licensing for aquaculture delivered to Marine Minister 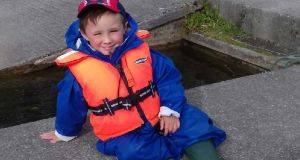 Harry O’Toole, Jnr, after a fine day’s fishing on Lough Corrib with his father 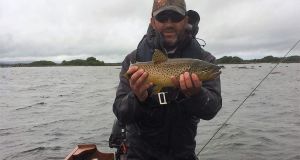 Brian Madden from Clare with one of 13 trout from Corrib 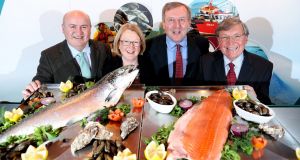 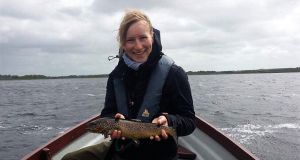 Maren Scheyhing from Stuttgart, Germany, with her first ever Mask trout

The Minister for the Marine, Michael Creed, has received a report from the independent Aquaculture Licensing Review Group which examines the process of licensing for aquaculture in keeping with actions identified in Food Wise 2025 and Ireland’s National Strategic Plan for Sustainable Aquaculture Development.

The group was tasked with making recommendations to improve the existing licensing system and to undertake steps to review the legislative framework.

As part of its work, the group looked at the existing process, undertook stakeholder consultation and examined national and international consent systems to determine best practice for managing a complex licensing process in a transparent, environmentally appropriate and legally robust way.

Both Food Wise 2025 and the National Strategic Plan identified issues with the current licensing system and recommended an independent review to examine existing challenges and propose improvements in line with best-practice internationally.

The report will be published online at fishingnet.ie/independentaquaculturelicensingreview2017/

“I wish to thank members of the group, Mary Moylan, Lorcán Ó Cinnéide and Ken Whelan, for the expertise, focus and attention they have brought on issues arising for this licensing process. This report was commissioned against a backdrop which has accumulated a significant backlog and stakeholder frustration on many sides,” the Minister said.

There are major concerns regarding sea trout decline, particularly along the western seaboard which require future management underpinned by a comprehensive policy.

Sea trout in Ireland have traditionally been identified with salmon. This consultation policy will consider establishing a separate identity for the species.

The policy will make recommendations on a range of issues including management of stock and any legislative changes that may arise. Protection and conservation, stock assessment, education and promotion will also be addressed.

Interested parties are invited to make submissions for consideration by the Sea Trout Policy Group. The public consultation period will run until Wednesday, July 12th, 2017.

While mainly about fly fishing, it will cover all aspects of the environment. The trust’s aim is to conserve and promote the natural stocks of sea trout in Strangford Lough through the improvement of the ecology and natural spawning beds in the Dibney River.

However, the Dibney is only one of the rivers that flow into Strangford Lough and for the project to succeed the campaign seeks to promote a debate on wider conservation issues.

The fair includes bug tanks, free fly-tying and casting instruction, and all aspects of safety. Under 15s will be admitted free of charge. (All instructors are child protection registered sports instructors.)

A fisheries officer gave evidence of tracing the source of the fish kill back to a pipe originating from a silage pit. The incident resulted in damage to fish stock in the Yellow River, which is an important spawning tributary for salmon and trout, with the absence of aquatic life noted for a considerable distance downstream.

The landowner fully co-operated with officers and sought to remedy the incident without delay. However, the polluting matter had already impacted the river. Judge Mary Devins fined him €750 with three months to pay, as well as laboratory expenses of €464.94 and legal costs of €600.

Next Sunday (June 25th) a catch and release competition for the Federation Cup will be held out of Birchall, with proceeds going to the enhancement and development work on Corrib. Entry fee is €25. Further details from Philip Comber, 086-278 6301.

All quiet on Mask

Mask was noticeably quiet last week as many anglers have returned home after their annual mayfly fishing adventure, according to Ronan Cusack. Weather was very unseasonal with strong winds and torrential rain which resulted in a significant increase in water levels.