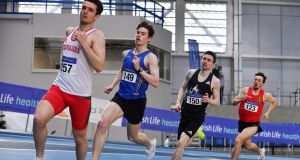 The plan was for some race experience and maybe some more qualifiers for next month’s European Indoor Championships in Poland and instead it turned into a festival of national records and personal bests, Mark English and Cian McPhillips fronting the landslide of super-fast times at the Athletics Ireland Elite Micro Meet.

The absence of spectators at the Sport Ireland Indoor Arena at Abbotstown didn’t take from the excitement either, English just about holding off the challenge of rising teenage star McPhillips to break his own Irish indoor 800m record on Saturday evening, clocking 1:46.10 to his younger rival’s 1:46.13.

For English, running in his first indoor race of the season and also now working as a medical doctor, that improved his previous indoor record of 1:46.82, clocked in Athlone back in 2014; rarely, possibly even never, has a second place been so handsomely rewarded, McPhillips, a Leaving Cert student at Moyne Community School in Longford, improving his best by six seconds, taking almost two full seconds off the Irish junior record which had belonged to English, his 1:46.13 the second fastest run indoors by an 18-year-old in European athletics history, second only to 2004 Olympic champion Yuriy Borzakovskiy of Russia.

It also qualifies McPhillips, who considers himself a 1,500m specialist, for the European Indoors in Torun, Poland, the weekend after next, and such was the quality of that race third-placed John Fitzsimons was also inside the standard with his 1:47.80. Several other Irish athletes followed in quick succession, John Travers winning the 3,000m in 7:50.40, with Darragh McElhinney also smashing his personal best in second with 7:50.80, an Irish under-23 record.

Into Sunday’s rollover and Phil Healy continued apace, improving her indoor 400m best to 51.99, the sixth fastest by any European this season, with Sophie Becker (53.20) and Sharlene Mawdsley (53.56) also inside the qualifying standard for Torun.

The women’s 800m provided even greater depth of impression, with Georgie Hartigan, who last year switched allegiance from Britain and is now running with Dundrum South Dublin AC, running the second fastest on the Irish all-time list when winning in 2.01.48, with Louise Shanahan (2.01.67) and Iseult O’Donnell (2.02.29) also setting significant personal bests and European marks.

The men’s 60 metres also saw Leon Reid improve his indoor best to 6.68 seconds, having also won the 200m on Saturday with a best of 20.99, and there was plenty of consolation in second place there too for Israel Olatunde, the UCD AC athlete, also still only 18, who broke the Irish under-20 and under-23 records with his 6.73.

Also adding his name to the list of Irish athletes qualified for the European Indoor was another UCD AC athlete, Luke McCann, who won the 1,500m with a personal best of 3:40.03, Travers again inside the standard with his 3:41.74, and in the first of two women’s 60 metre races, Molly Scott also took the win and another European Indoor standard to boot in 7.36. Despite the lockdown, one of the most productive weekends for Irish athletes in many years.