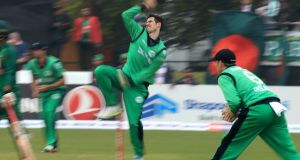 George Dockrell took 3-90 as the Ireland Wolves bowled Bangladesh A out for 337. Photograph: Donall Farmer/Inpho

Ireland will be one of 13 teams which will participate in the new ODI league unveiled by the ICC in New Zealand on Friday.

The format will guarantee the Irish regular series both home and away and is seen as a real boost for the game following on from their recent elevation to Full Member status and confirmation of their first men’s Test against Pakistan next May.

The league will see all games having real context, with the first edition of the league having each side play four home and four away series , comprising of three ODIs moving to all teams playing each other from the second cycle onwards. The league will provide a direct World Cup qualification pathway when it gets under way in 2020.

Zimbabwe was also confirmed as the host country for the 2018 World Cup Qualifiers, where Ireland will bid to qualify for their fourth consecutive World Cup - that tournament is scheduled to held next March.

Ireland Women will also be on the qualification trail next summer as they travel to The Netherlands who were confirmed as host of the ICC Women’s World Twenty20 Qualifier 2018. The ‘Girls In Green’ won the 2015 qualification event which was held in Thailand, beating Bangladesh in a last-ball thriller.

Meanwhile In Sylhet, Ireland Wolves have given themselves a fighting chance of victory going into the final day of their unofficial Test against Bangadesh A.

A brilliant 90 from Instonians James Shannon followed by two wickets by Andrew McBrine has left the hosts on 27 for 2 in their second innings, needing a further 105 with 8 wickets remaining.

George Dockrell and Andrew McBrine finished with three wickets apiece as the Irish wrapped up the final four first innings wickets for 15 runs in the morning session, to limit the deficit to 82 runs.

Andrew McBrine struck twice in the space of three balls to give the Irish real hope, but first innings centurion Sadman Islam (14*) ensured no further damage for his team before the close.

‘It was great to get four wickets this morning quickly after working hard throughout the day yesterday,” said skipper Andrew Balbirnie, who was quick to praise the contribution of James Shannon. “It was brilliant to see James Shannon in the runs and the way he played on a very tricky third day pitch was superb and guided us to a lead we can defend.

“It’s a great boost for us going into the final day to get them two down early, and we’ll certainly hunt for the win tomorrow.”