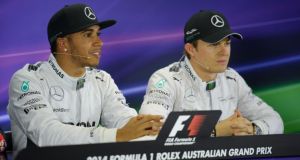 The Mercedes executive director Toto Wolff has described Lewis Hamilton and Nico Rosberg as enemies in their head-to-head battle for this year’s Formula One world title.

With six races remaining, starting with Sunday’s Singapore Grand Prix, just 22 points separate the pair as they fight it out for the sport’s most prized trophy.

Reflecting on what has unfolded between them on the track this season, Wolff concedes there has been a noticeable deterioration in their roles as team-mates.

Speaking to BBC Sport, Wolff said: “It has changed from, let’s say, an almost amicable relationship at the beginning of the season to a very intense moment, where it was almost like realising these two are enemies competing for the world title.

“It’s also a learning process. These boys have been calibrated their whole life that their main priority is to win the drivers’ championship in F1.

On occasion Rosberg has shown a ruthless side to his nature, such as in Monaco during qualifying, and again in Belgium where he opted not to take avoiding action, instead colliding with the Briton and puncturing a tyre.

Wolff added: “There are 22 guys out there and all of them are ruthless. They know what they want and they will try to take it. Nico has always been like this. I don’t know why anyone had the perception of him being Mr Nice Guy.”

As for Hamilton, who has again endured one of those rollercoaster campaigns that have become his trademark over the seasons, Wolff insists there is no need to change the 29-year-old.

“He has found his own way and developed extremely impressively and he doesn’t need so much management,” said Wolff. “We need to understand what kind of background and environment we need to provide so he functions best.

“That’s not the case. Lewis needs all that. It is his personality and it makes him function well.”