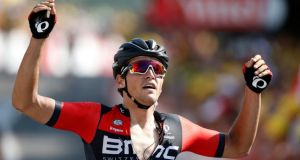 Blasted by hail in the mountains on Thursday, the Tour de France was basted in heat nudging 40C on the plains on Friday, speeding north-east in a sweating, dripping mass for the first of four stages between the Pyrenees and Alps. The Belgian one-day Classic specialist Greg Van Avermaet took an intense uphill finish here from the Tour’s new “eternal second”, Peter Sagan, with Chris Froome and all the other overall contenders on his heels at the top of the stiff 500-metre climb to the line.

Froome and the rest know valuable seconds can be lost and won on a finish such as this, with any gaps in the strung-out peloton accentuated by the gradient, so they had good reason to be attentive. A few metres ahead of Froome’s close-knit 11-man group, Van Avermaet and Sagan fought out a drawn-out sprint, with the Belgian leading out, closely followed by the Slovak, who looked poised to come past. Instead, Van Avermaet pressed on the pedals to open a gap of well over a bike’s length by the finish line. Froome crossed the line in sixth place to retain the yellow jersey by 2min 52sec.

This was the third stage win of this year’s Tour for the Swiss-sponsored BMC team, who took the team time trial last Sunday in Brittany, and the opening day’s time trial in Utrecht with their Australian Rohan Dennis. They also hold second overall with the young American Tejay Van Garderen, and this was something of a bonus after they took a back seat during the lengthy chase behind the day’s six-rider escape, the last of whom – Cyril Gautier, Thomas De Gendt and Wilko Kelderman – hung on until partway up the final climb.

Typically for Flandrian cycling, Van Avermaet is a third generation cyclist whose father and grandfather raced as professionals. He is a consistent Classic finisher who has yet to land one of cycling’s monuments, although as much interest centred on the man who finished on his heels, Sagan, who was understandably disgruntled with his fourth second place in 13 stages, echoing his frustration of last year when he finished in the first five on all the opening seven stages.

“I’m not sad, I’m pissed – I’m very angry and disappointed,” said Sagan after finishing second again in a Tour in which he has also taken two third places and a fourth. “I was waiting too long to start my sprint, it was my mistake.” He retained the green jersey of points leader but that did not satisfy his mercurial team head, the Russian oligarch Oleg Tinkoff, who tweeted: “I fucking crashed my Bang & Olufsen TV set. The team was working hard, he [SAGAN]was well positioned, but … no karma.”

This was anything but a tranquil day in the saddle, given the heat, with domestiques dropping back to their team cars every few minute to collect bottles, although, as Froome said: “It never felt like enough.” On other days, the escape would have been given free rein, but there are too many teams in this race who know the chances for stage success are few and far between. Behind the sextet, the pursuit was initially led by John Degenkolb’s Giant-Alpecin team, before Alberto Contador’s Tinkoff-Saxo team joined in, well aware that the uphill finish would suit Sagan.

The peloton split under the strain before regrouping after Vincenzo Nibali suffered a puncture in both wheels, while Nibali’s runner-up last year, Jean-Christophe Péraud, has been having a nightmarish race and it took a turn towards disaster when he touched a wheel as the battle for position heated up, before sliding and rolling down the tarmac. The 38-year-old was left with most of his left side skinned, his shorts in pieces, one little finger broken or dislocated, and his left arm covered in blood.

Tellingly, no team-mates waited for him – at 33rd overall, Péraud is no longer the leader of his Ag2R team – but he regained the peloton helped by the slipstream of the service cars in the convoy behind the bunch, and the tactic known as the “sticky bottle”, where a rider receives a bidon from his team car and is towed along for a little while. He was one of many stragglers, with riders finishing in dribs and drabs up to 22min behind Van Avermaet.

Skirting the south sides of Toulouse and Albi, the day’s route headed north-east through the sunbaked cornfields of the Tarn before entering the Aveyron, where the 87-metre-high tower of Rodez’s cathedral rose up on the horizon. The local farmers were out in force along the way, with the most dramatic decoration a vast hen in a basket etched out on the stubble of a cornfield by the Tarn’s farmers, matched later on by a massive cockerel from the agriculteurs of the Aveyron.

This was the first of four transitional stages, which take the riders to the Alps by early next week, and on Saturday the heat is set to continue for the second of the four through the Aveyron and Lozère hills to Mende, where the stage finish is at the town’s aerodrome on top of a steep 3km climb, the Croix-Neuve. As if that weren’t enough, it is preceded by another second-category ascent 30km out. “I expect guys to try, in fact it looked like they were trying today,” said Froome. These are difficult roads and as the heat bites the standings could well be shaken up once again.