Fighters take lawsuit which may threaten future of UFC 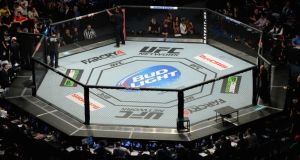 A group of current and former UFC fighters have claimed that the organisation is an illegal monopoly under federal antitrust law. Photograph: Jeff Bottari/Zuffa

A group of current and former UFC fighters have claimed that the organisation is an illegal monopoly under federal antitrust law and have filed a lawsuit in the US District Court for the Northern District of California.

The UFC, in their view, unlawfully stifles competition from other mixed martial arts (MMA) leagues. By denying UFC fighters opportunities to bargain with rival MMA leagues, the UFC can pay its fighters low wages and impose strict employment restrictions. According to this theory, the UFC leaves its fighters with no bargaining leverage and then takes full and brutal advantage of this absence of competition.

The group includes UFC star Cung Le as well as former stars Jon Fitch and Nate Quarry. They seek certification to represent other fighters in what might become a massive class action.

In a column for Sports Illustrated, Michael McCann, a Massachusetts attorney, explains that if successful, Cung and co-plaintiffs demand monetary damages, which would be automatically trebled under antitrust law, plus a court injunction that would force changes to the UFC a sport that has grown in value from $2 million (€1.6 million) in 2002 to as much as $3.5 billion (€2.8 billion) today.

McCann writes: “ The fighters contend they’ve been forced to sign oppressive contracts that make them indentured servants to UFC. As the fighters see it, they’ve been unlawfully denied free agency and name, image and likeness rights.

“This denial has led to seemingly low salaries compared to massive UFC revenues. According to Cung’s complaint, while the starting fight purse for a UFC fighter is just $6,000 (€4,800), the UFC generated $483 million (€388 million) in revenue from October 2012 to September 2013 and “has profit margins higher than all or nearly all other major professional sports”.

“While there is considerable debate about average and median earnings for UFC fighters, estimates generally indicate the average UFC fighter takes home less than $100,000 (€80,000) a year.”

McCann believes that the UFC will defend on four key points: that fighters voluntarily sign contracts to fight in the UFC; UFC will portray its rules and business practices as reflecting superior business acumen; a previous Federal Trade Commission investigation into UFC for antitrust violations and that a judge forcing changes to its business model would harm the very industry at the heart.

McCann finally points out that antitrust litigation in the United States often takes years to play out, so do not expect a swift resolution.

You can read the column in full here.