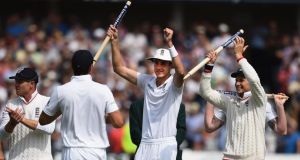 England have regained the Ashes with an innings-and-78-run victory at Trent Bridge.

Alastair Cook’s team wrested back the urn, after their 5-0 whitewash defeat in Australia two winters ago, when Mark Wood completed a season’s work by bowling number 11 Nathan Lyon 39 minutes into the third morning of this fourth Investec Test.

Victory here, to give England an unassailable 3-1 lead with one still to play at The Oval, was achieved on the back of Stuart Broad’s brilliant seam-and-swing bowling early on day one and Ben Stokes’ career-best six for 36 in the second innings.

On his home ground, Broad took his 300th Test wicket with just the third ball of the match — and was then unstoppable on the way to figures of eight for 15 as Australia were shot out for 60 in 18.3 overs.

There was, realistically, already no way back from there for the tourists — and Joe Root made sure with 130 as England took a first-innings lead of 331.

Michael Clarke was unable to lift his team throughout the series — apart from in their remarkable 405-run series-levelling success in the second Test at Lord’s. Within seconds of losing the Ashes, he announced his retirement from international cricket.

Stokes had undermined Australia the previous evening, and hastened their final decline too.

He took his sixth wicket, and the first of three still required after Australia resumed 90 runs adrift on 241 for seven, with the last ball of his second over of an occasionally cloudy morning.

Mitchell Starc went for a duck, fencing a routine catch to Ian Bell at second slip, and Josh Hazlewood was also scoreless when Wood (three for 69) yorked him to leave just one more wicket needed.

It turned out to be Lyon’s, edging on as he tried to leave so that Adam Voges was stranded on a painstaking 51 not out.

It was the cue too, of course, for a release of celebratory emotion from England and cheers reverberating round a sell-out crowd who would receive a 50% refund after witnessing just 10.2 overs — and the small matter of the Ashes reclaimed and national pride restored.