Dublin Marathon athlete's eye on children and focus on prize 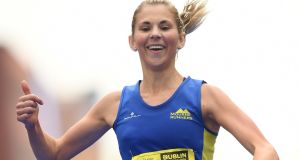 There is absolutely no scientific proof that childbirth can enhance marathon performances, although Laura Graham presents some compelling evidence.

Indeed, as the first Irish woman home in the Dublin Marathon on Sunday – just like outright winner Helalia Johannes of Namibia – Graham attributes at least part of her winning performance to the strength of heart and mind that comes with motherhood. She should know: the 30-year-old from Co Down has four young children, aged six, five, four and two.

Graham ran her first marathon in Belfast six years ago, for charitable purposes after her father had a heart attack. She then stopped running completely and gave birth to her four children, only starting back again in 2014.

Against that backdrop, and with what she modestly suggests is only an ordinary talent, she didn’t expect herself to be the first Irish woman in this year’s race, nor indeed did too many others. Yet her time of 2:41:54 knocked six minutes off her previous best, good enough for 10th place in an elite race otherwise dominated by the east Africans. 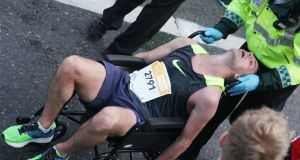 “No, I really, really didn’t expect that,” she says, clearly chuffed at her success. “I loved the course, conditions were perfect, very little wind, and a great atmosphere. But I am completely surprised to be the first Irish woman. For most of the race I wasn’t even sure I was leading it. I just had it in my head to go for it.

“And I actually loved every minute, even when it got tough towards the end. I just wanted to run steady, run smart, for a change. When I ran London last year, I went out far too quick. I trained harder for this one as well, so hard work pays off, I suppose. But the four kids take up a lot of time, and of course they come first.”

Indeed, her four children were out on the course to cheer their mother on. Graham also works part-time at the leisure centre in her home town of Kilkeel in south Co Down, at the foot of the Mourne Mountains. That might sound like a perfect training environment, although she does a lot of her running on a treadmill so as to keep an eye on her children.

She started running “by complete accident” after her father had a heart attack six years ago. “I ran the Belfast Marathon for him, for a charity for chest, heart and stroke. Then I gave up, to have the children, and only started back two years ago.”

Graham also ran the Dublin event for an autism charity, and admits she has brought more structure to her preparations, coached by Brian Maxwell, of Mourne Runners AC. She ran evenly balanced splits the entire way on a day without a puff of wind.

As first Irish finisher, Graham beat two highly experienced women to the top of the Athletics Ireland podium (the race doubles as the National Championships). The 2012 Olympian Caitriona Jennings, from Donegal, was more than three minutes back on 2:44:59, while the 2008 Olympian Pauline Curley (now aged 47) was the third-best Irish woman on 2:48:38, making it 10 podium finishes in 10 attempts, having been the first Irish woman home last year.

Johannes (36) won back the outright Dublin title she previous claimed in 2011, after a battle with Ehite Gebireyes, her winning time of 2:32:32 just one second ahead of the Ethiopian. Now 36, Johannes also took a year out last year to give birth to her son, and credits that as giving her extra motivation to get over the line and claim the top prize of €12,000.