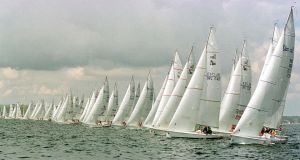 Payne, a member of a well-known Munster sailing family, represented Ireland in the 1956 Olympics in Melbourne and four years later in Rome, competing in the Finn single-handed dinghy.

Last night, Royal Cork club mate and four-time Olympian Mark Mansfield said: “Somers was an inspiration to us all at RCYC because he was one of the first from Crosshaven to sail in the Olympics.”

A small boat stalwart for over 40 years, Payne’s national and international achievements also led him into Admiral’s Cup campaigns but he always returned to his beloved National 18 class, a dinghy he sailed into his 70s.

In the run up to the Melbourne Olympics, in 1955 Payne walked from Heuston Station (then Kingsbridge) in Dublin city to Malahide for the trials, some 20km, after missing his bus. He won the trial but the Irish Yachting Association required him to also attend a Finn event in the Netherlands (at his own expense) before nominating him for the Australian Games.

The report of the Dutch event commended the Crosshaven helm’s result under difficult circumstances – apparently local knowledge was key as part of the course took competitors through a reed bed!