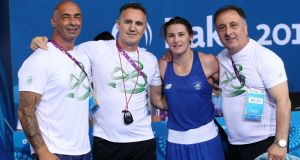 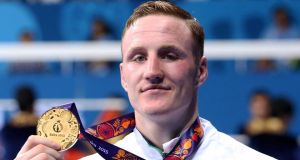 Michael O’Reilly with his gold medal at the European Games in Baku. Photograph: Ryan Byrne/INPHO

Get Billy Walsh to prepare, prepare to succeed. If the last two weeks in Baku confirmed one thing it’s the increasingly reducing odds that as long as Walsh is in charge of the boxing production line there will be medals.

Last Saturday was the latest cash-in, the gold medals won by Katie Taylor and Michael O’Reilly – within 90 minutes of each other – neatly completing the set of silver and bronze already won by Brendan Irvine and Sean McComb. It left Ireland third-placed on the boxing medal table, behind hosts Azerbaijan and Russia (and ahead of Great Britain), and an even brighter shade of the four medals won by Irish boxers at the London Olympics.

This wasn’t without an element of coincidence. Because once the concept of these European Games became a reality, Walsh immediately realised Azerbaijan would be eyeing up more boxing medals than anyone else. So the best way to try to beat them was to join them.

With that the Irish head coach requested his team could join the Azerbaijani boxing squad, in Baku, for a two-week training camp in the lead-up the Games. Yes, he was told, and the Bulgarian boxers would be there too.

“Perfect,” thought Walsh, and booked flights and several rooms at the Qafqaz Baku City Hotel, on Tbilisi Avenue, not far from where his team would box for medals, down at Crystal Hall.

Only two weeks before they were due to depart, still no word of confirmation.

“We wanted to be here to acclimatise, firstly, and we wanted to be in with the Azerbaijanis, because we knew they were the best team here. And it worked out exactly that way. We got to spar with a lot of their fighters during those two weeks and that was definitely the difference in winning a few medals.”

Such as the gold medal won by O’Reilly. His middleweight final against Azerbaijani number one seed Xaybula Musalov succeeded exactly the way Walsh had planned it, in no small part to those sparring sessions.

“Oh yeah, we had a good look at Musalov,” says Walsh, “and we knew exactly how to deal with him. They actually spent a few days in the ring together, and tore lumps out of each other. And I knew Michael had the ability to beat him, because when he punches, he hurts. And I knew at some stage he was going to hurt this guy.”

Which of course he did – delivering on the potential Walsh first spotted when O’Reilly won the silver medal at the European under-18 championships at Citywest, in 2011.

“He lost that bout on a split decision,” says Walsh. “I don’t know what happened the hometown decision that night. Because I thought he won the fight. But as an underage boxer, Michael was winning titles all the way up. He won his first senior last year, and that got him onto the squad, and since then he’s been cutting his teeth. He’s 22 now, and he has that maturity now.

“And he’s confident, but he’s very laid-back, as well, and that can be frustrating for us coaches. Sometimes he needs a kick up the arse just to get him to train. He’s that good, he feels like he doesn’t have to train sometimes. But once he gets into the ring he gives it everything.”

“And the only Irish boxing medallist from London that we have here is Katie.” (Michael Conlon and Paddy Barnes didn’t compete; John Joe Nevin has gone pro). “So it shows this sport keeps producing new talent, and we have a system there now to nurture the talent, and take them to the highest level.”

Indeed Taylor has now been at the highest level since 2005, her gold medal garnering her enough points to ensure she’s ranked number one going into 2016 for the 10th successive year. Yet whatever pressure she must bear with that is contained somewhere deep within. Pound-for-pound the bet female boxer in the world? Ireland’s greatest-ever women’s athlete? She smiles at the probing.

“Well that’s for you to say,” Taylor replies, to the first suggestion. “But it’s great to be in that conversation. I also feel I’m improving all the time. And I think when you’re so consistent, people have to stand up and take notice. I’ve said before I don’t think people recognise the consistency enough.

“As for Ireland’s greatest athlete, well, Sonia O’Sullivan has always been my hero, the one I look up to, and I still rate her as the greatest Irish athlete of all time. I don’t know if I can take her spot yet.”

For Ireland’s two other bronze medallists – the badminton mixed doubles pair of Sam and Chloe Magee, and the men’s doubles pair of Sam (again) and Joshua Magee – it was somewhat disappointing not to get higher up the podium, particularly when their own expectations pointed that way. Still, and not for the first time, it would have taken a lot to outshine the Irish boxers.

1 A beautiful, happy accident - Moneyball is the best sports movie ever
2 Matt Williams: We all need a bit of Bud Maher’s resilience right now
3 Nicholas Quinn: ‘Swimming became how I dealt with grief’
4 Is it time for the New England Patriots to tear it down and start again?
5 Reality Bites – Tales from the new normal: Caitríona Cormican
Real news has value SUBSCRIBE