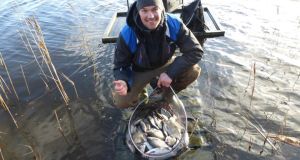 Cavan catchment: Robertas Zilaitis, a member of the newly formed Lithuanian club Go and Catch, is happy with his a fine bag of roach and hybrids from lakes around Bailieboro

‘IF WE are to face the reality of our changing environment, we need to deal with the collapse of wild Atlantic salmon stocks. We must confront the question, is extinction of the species inevitable? If the answer is ‘yes’, then, what is the timescale? If the answer is ‘no’, can we give the wild salmon time for its natural resilience to kick in?”

These are just some of the questions posed in the Atlantic Salmon Trust (AST) Annual Review, which sets out to provide an overview of where we are in dealing with challenges faced by wild Atlantic salmon and sea trout throughout their lives.

“Anyone with an interest will be aware of the last two years of low catches in the North Atlantic countries, with the exception of Russia’s Kola Peninsula. Early returns indicate that 2014 catches in North America, Iceland, Norway, Ireland and the UK were considerably lower than the five-year average,” the report says.

As with most issues in the natural world, the situation is more complex than might at first appear. For example, the River Slaney had its best spring returns for 30 years, with most fish in prime condition and with average weights of 12lbs to 15lbs. All these fish were caught and returned.

In contrast, angling in many North Atlantic seaboard rivers were not favourable for high-catch returns. Grilse returns in European salmon countries were at best variable, and in some cases they were virtually non-existent.

So what are the facts at our disposal, AST asks? The number of wild Atlantic salmon at sea has declined by 60 per cent between 1970 and 2014, and are now extinct in 300 North Atlantic seaboard river catchments;

Despite international pressure to end mixed stock drift and coastal netting, and the decline in killing salmon by anglers, the number killed by human exploitation in the bio-region remains too high;

The Salsea project demonstrated that wild Atlantic salmon swim alongside shoals of horse mackerel and herring. We therefore know for certain that some salmon are being accidentally caught up in nets of commercial trawlers.

Concluding, the AST says it is committed to a “big picture” approach to salmon conservation. “We need widespread recognition that continuing to spend most of our limited resources on the 5 per cent of fish that get back to our rivers is to ignore the 95 per cent that die at sea.

“We want to concentrate on research that has a prospect of producing measurable outcomes within a reasonable timescale. We are therefore looking at areas where human intervention can make a difference to numbers of adult salmon returning to rivers throughout the North Atlantic region.”

Eker, who is best known for his involvement in the boat and car business, will join an investment round of $29.5million (€25.4m) for Fredrikstad Seafood, according to reports.

Founded by Erik Heim, Fredrikstad Seafood applied last September for a license to farm 3,600 metric tons of salmon on land, according to iLaks.no. Heim, who holds approximately 10 per cent of the business, hopes the license will be in place by February.

1 Robbie Henshaw likely to be the only Irish change for France finale
2 Seán O’Brien: Anger over my parents’ break-up never left me
3 Cian Healy: ‘Realistically I got away with murder when I was younger’
4 Barcelona president Josep Maria Bartomeu and board of directors resign
5 Gerry Thornley: Antoine Dupont and France look perfectly primed for Ireland visit
Real news has value SUBSCRIBE