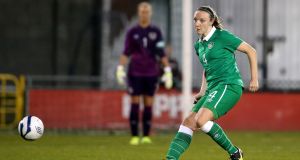 Louise Quinn: “I just wanted to give it a try, to see how far I could push myself in one of the best leagues in world football.” Photograph: Cathal Noonan/Inpho

“We were training on Tuesday and it was zero and we were like, ‘it’s roasting!’” Well, compared to the forecast for the week, zero was positively balmy, some nights dropping to ten below.

Is it at times like that you wished you’d signed for a club in Miami?

“A bit, yeah,” she laughs, although there’s some warmth ahead, she’s off to America next week with the Irish squad for games against their hosts in San Diego and their under-23 side near Los Angeles.

She signed up with a player agency and soon after Eskilstuna, in need of a centre back, spotted her file. Deal done.

“I just wanted to give it a try, to see how far I could push myself in one of the best leagues in world football. It was difficult enough at first, culturally we are quite different.

“They say the Swedes make the worst of strangers but the best of friends, they take a while to open up. But being part of a team is obviously a big help, I was able to slot right in.”

She wasn’t starting at the highest level, though, Eskilstuna, an all-female club formed in 2002, in the second division when she arrived. But she was convinced by their ambition.

How has it gone? Very nicely. In season one, Eskilstuna were promoted as champions. In season two, they finished in a solid enough seventh place, out of 12 teams, in the top flight (Damallsvenskan).

And last season they finished runners-up to reigning champions FC Rosengard, the title race going down to the last game.

That was enough to qualify them for this year’s Champions League.

Eskilstuna coach Viktor Eriksson describes Quinn as one of the best defenders in the league where she comes up against some of the leading players in the game, among them five-time World Player of the Year Marta of Brazil.

“It’s not a lot of money at all, it’s enough to get you by, but you’re given everything you need for football. As soon as I finish playing I’m going to have to go straight in to work, there’ll be no pussyfooting around, but that’s what’s refreshing about the women’s game – it’s not about the money. For us the reward is the crowds we get, people around the town appreciating what we do. We do it for the love of it.”

And they get plenty of appreciation in Eskilstuna, 6,300 attending their last game of the season.

“Our average is about 2,600, so that was just incredible. We’re the biggest supported team in the town and surrounding area. Go to the local pubs and they’re showing our games live. There’s good media coverage, some of the games live on TV. Lots of coverage in the newspapers too.”

“All the girls put a lot of work in. We’re emailed a schedule each week, some of us would go to a school to talk to kids, help out at training sessions, others to the shopping centre to hand out game schedules and sell jerseys and scarves. And there’s a big push on social media too. It really pays off.”

Her father played for his county, but while his daughter gave Gaelic football a go, as well as athletics and hockey, soccer was her first love.

“I said to my Ma [Jacinta] , ‘I don’t know how to Irish dance or anything like that’, and she’d say, ‘I tried to bring you to classes but all you wanted to do was play football!’ I was just constantly out on the streets kicking a ball.”

She was back home on those Blessington streets at Christmas.

“I ran around the town on Christmas Day. Past all the kids on their new bikes – and people on their hoverboards. And then I went mad and had two potatoes with my dinner.”

The life of a professional. And Louise Quinn is loving it.

1 Nicholas Quinn: ‘Swimming became how I dealt with grief’
2 Ireland’s racing authorities prepared to be ‘creative’
3 A beautiful, happy accident - Moneyball is the best sports movie ever
4 Xavi says he is ready to return to Barcelona as boss
5 Tokyo Olympics likely to start on July 23rd 2021, reports
Real news has value SUBSCRIBE