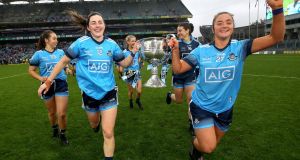 There is an age-old theory in our house that if you want to see Gaelic football at its purest you might have to tune into a women’s football match. Obviously it hasn’t been tainted by rule changes, very few counties adopted a defence-only tactic, and generally the skillset is untainted by whatever law will punish these skills.

The club All-Ireland finals, from junior all the way to senior, were enthralling contests. With all three games going down to the wire, the general consensus was that women’s football is probably one of the sports to watch.

Yet as the Ladies’ Gaelic Football Association basked in three glorious club finals, the fixture plans and the new structure for intercounty were met with concerns and queries.

The thing about women’s sport is that usually the best teams are the standard-bearers, and they generally are the ones who will drag the rest up. For the large part of a decade that was the Cork footballers.

While Cork football was the standard-bearer, what many people forget is that a good portion of those finals were won by the tightest of margins.

When Cork won their second All-Ireland in the eventual five-in-a-row back in 2006 against Armagh, Cork struggled in that game until Nollaig Cleary got a pivotal goal. Armagh had actually made the giant leap from junior to senior in the space of 12 months, and lost because of a free that had dropped short just before the hooter blew. Likewise, the clashes against Dublin.

Cork always had to dig way deeper than expected to get over the line, as well as having luck on their side when it came to 50-50 decisions. So while women’s football has always known dominance in terms of its winners, the Ladies’ Gaelic Football Association must now ask itself about the dominance that is coming down the road with the talented Dublin women.

Not to begrudge the Dubs. After all, they can only face what is in front of them. Yet given the fact their only game in Leinster was against the eventually relegated Westmeath team, Dublin did coast their way through the championship.

Having amassed 21-75 in just six games and only conceding 5-41, the writing was on the wall for a lot of teams who faced Dublin.

But Dublin did not just become a scoring machine overnight. In 2017, Mick Bohan told journalists how women footballers have a tendency to kick the ball with the laces when going for scores, rather than an instep technique. In just under two seasons Bohan’s team amassed large scoresheets. A simple skill and investment in that skill can have such huge rewards.

With Westmeath now relegated and Meath missing out on their promotion after losing to Tipperary in the All-Ireland intermediate final, Bohan and many other women’s football followers got part one of their wish – a provincial championship was scrapped. As Leinster only had one senior team the provincial championship became pointless unless an unusual scenario was created to facilitate a more competitive journey to the final for the Dubs.

As the Connacht championship is eerily a one-game championship unless Mayo and Galway draw in the final or Roscommon or Sligo get their teams on the rise, the only championships with any competitive games are Ulster or Munster, and even at that it depends on which teams have their houses in order.

In Munster, Kerry have fallen away and are faced with a tough time replacing their retirements. Waterford seem to be the ones closest to tame Cork unless Tipperary can carry over their form.

In Ulster, Monaghan and Cavan both have the potential, but given their no-shows in last year’s championships it’s hard to see any dramatic uprisings in Ulster.

So the Ladies’ Gaelic Football Association is faced with the same questions all women in sports are facing at the minute. With the rise of investment, both financial and resources, and as groups begin to form at the top in the elite quarter, will women’s sports become as semi-predictable as that of men?

If the onus is on top teams to pull the rest up are we just missing out on the other problems that women’s sports face like poor investment in some counties on underage training, proper investment even at senior level, and, at worst, people avoiding games because they tuned in to see two dead rubbers going at it.

It can be seen across all sports, soccer with the USA, Lyon at rugby club level, hockey with the Netherlands and rugby with New Zealand. While results in the now are essential to get people interested, the results of the future will be affected if we solely rely on inspiration and standards from the top teams rather than coaching, investments and a set-up for the future.