A short clip from a World Golf Hall of Fame tribute to Christy O'Connor Senior when he was inducted into that institution through the Veterans Category in 2009. Video: World Golf Hall Of Fame 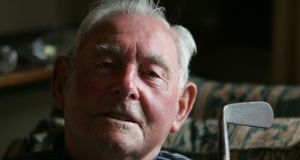 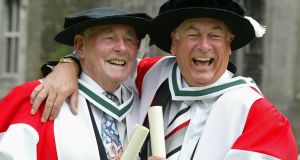 Funeral arrangements have been announced for Irish golfer Christy O’Connor Senior who died at Dublin’s Mater Hospital on Saturday, aged 91.

He will be reposing at the Kirwan Funeral Home, Fairview Strand, Dublin on Monday from 3.30pm to 7pm with family in attendance.

His removal to St John the Baptist Church, Clontarf Road, will take place on Tuesday morning arriving for 11.30 am Requiem Mass. He will be buried afterwards at St Fintan’s Cemetery, Sutton.

President Higgins has led tributes to “gifted sportsman and a wonderful human being” Irish golfer Christy O’Connor Senior who has died aged 91.

Mr Higgins said the Knocknacarra, Co Galway native “ opened up the ground for many talented golfers, and opened the world of golf to countless people in Ireland and abroad.”

“Those of us fortunate enough to have met him will never forget this outstanding man and his great character of humour and compassion,” he said in a statement.

O’Connor played in the Ryder cup 10 times and played for Ireland in 15 Canada Cup/World Cups. During his career over four decades he won 24 European Tour tournaments including two British Masters. He played on 10 consecutive Ryder Cup Teams from 1955 through 1973.

He also won a host of unsanctioned events and recording 10 top-10 finishes in The Open Championship, finishing as runner-up to Peter Thomson at Royal Birkdale in 1965.

He was known in the golf world as ‘Himself’ because of the way he embracd life.

He became the second Irish man to be inducted into the World Golf Hall of fame in 2009 , following Joe Carr. O’Connor said he never competed in The Masters because he “couldn’t affor’d to”.

Taoiseach Enda Kenny saidO’Connor was a wonderful man who left an indelible mark on professional golf and the sporting world.

“Christy O’Connor Senior was known as ‘Himself’ and always was himself... He was a larger than life character and the owner of the best pair of wrists in the game,” he said .

“He was a master of touch and feel on the greens and his brilliant golf was iconic for so many people, ever before television brought golf tournaments into every home.

“As you might expect from a son of Ireland, rain or wind never mattered to him, he was always simply outstanding.

“His record of achievement stands apart.”

Minister for Sport Shane Ross said he was a “a true pioneer for golf in Ireland and one of our finest sportsmen”.

O’Connor “was a major influence on so many golfers and was the corner stone on which Ireland’s impact on modern golf was built.

“He will be fondly remembered for his flair and resilience on the courses of Ireland, Britain and Europe and for his 10 successive Ryder Cup appearances.”

“His 1958 victory in the Canada Cup alongside Harry Bradshaw was sensational and was the beginning of great things on the international stage for Irish golf which continue to this day.

Ryder Cup director Richard Hills said: “Today we have lost not only one of the greatest Ryder Cup players the game has even seen, but an incredible man.

“My abiding memory of Christy is phoning him with George O’Grady to break the news that he’d been elected into the World Golf Hall of Fame in 2009, and he wouldn’t believe us.

“He said he’d only believe it if he saw it in writing, so I was dispatched to Royal Dublin to present him with a letter. As he read it, his face broke into a huge grin and he gave me a massive bear hug.

“The other thing that sticks out for me is how Seve [Ballesteros] used to watch him. When Seve, who as we all know was a genius of a player, first came out on tour in 1976, he would seek out Christy to watch him practise and watch his hands. Christy was built like a bull but he had incredible hands for golf.

“ Christy did so much for the game of golf and his legacy will long live on. After the tragic, sudden death of his nephew, Christy O’Connor Jr, in January, golf has lost two of its greatest men

. “On behalf of everyone at the European Tour, our condolences go to the O’Connor family.”

Gaël Fickou’s switch to wing a nod to what France expect from Ireland 20:39
Europa League round-up: Celtic let two-goal slip away in France as Lille level up 20:15
Barcelona presidential candidate aiming to bring Pep Guardiola back to Nou Camp 20:12
Connacht’s clash against Benetton postponed after Covid-19 outbreak at Italian club 19:36
Pádraig Harrington hot out of the blocks in Bermuda with opening 67 19:47
Here is your handy guide to sport on television this week