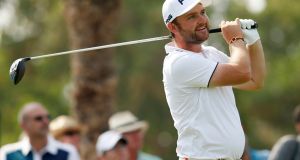 England’s Andy Sullivan tees off at the 18th hole during the second round Abu Dhabi Championship. He finished the day leading on 10 under par. Photograph: Paul Childs/Reuters.

The partnering of Clarke with Sullivan and Russell Knox for the opening two rounds of the HSBC Championship was no coincidence. Months may have to pass before Europe’s captain has hard decisions to make but he is rightly of a mind to take a close-up view of those bidding to make his team.

So far, so good for Sullivan, who has carded back-to-back 67s in the desert. It has not all been serious stuff, either.

“Darren has the number 60 on his golf ball. On the first tee I said: ‘I didn’t realise you put your age on the ball,’” Sullivan said.

The 29-year-old was part of a successful European contingent at last week’s EurAsia Cup, with Clarke again in the captain’s role. A glance at the photography that adorns the Englishman’s Twitter page tells any onlooker how much he cherished that Kuala Lumpur involvement. Now for a key phase in the Sullivan story.

“So for me, it just gave me that little bit more desire to go out this week and really perform and try and put my name in the mix and get really into the [top] ranking positions now.”

In Clarke, Sullivan has a firm supporter of both golfing and personality attributes. “He is playing beautifully,” said the Northern Irishman. “He is 10 under but he could be 14 or 15 because he is playing great.

“He is such a great kid as well, fun to play with and I really enjoy his company. Andy has such an easy way of going about things and is a fantastic player. It is all great to see.

“He is a quality ball striker. There are lots of brilliant young kids out here but not many of them move the ball both ways and with different trajectory. He does it all and that’s how he sees the game. A lot of kids don’t see that, they hit it as hard as they can and as far as they can and go from there.

“Sully is hitting a draw off one tee then a cut the next, a low draw second shot then a high cut. I love playing with people like that, I really enjoy it. He is a proper shot-maker and he is a really good kid.”

Knox was disappointed with a 73, edging him back to one under, but the Scot had Clarke’s understanding after losing his way on putting surfaces.

Clarke’s group was among those to benefit from at least finishing the second round, after a fog-induced delay of two and three quarter hours disrupted proceedings here. Some 60 players have not yet completed 36 holes.

The marquee group of Rory McIlroy, Rickie Fowler and Jordan Spieth stepped from the 13th green when bad light halted play. McIlroy had dropped back by a shot to five under, Spieth was also one stroke worse off than when starting but Fowler had picked up three in moving to within five of the lead.

Of those who had a straightforward day, Ian Poulter added a 69 to Thursday’s 70. Richie Ramsay produced a 66 which included a run of six birdies in seven holes, the odd one out was a double bogey. Guardian Service

1 Ireland backrow of O’Mahony, Van der Flier and Stander to be retained against England
2 Triple bogey costs Rory McIlroy as Adam Scott prevails at Riviera
3 On healing and wild hurling: The re-education of Diarmuid Lyng
4 Few, if any, have given as much to Munster as Garrett Fitzgerald
5 Solskjaer unable to say if Paul Pogba will play for Manchester United again
Real news has value SUBSCRIBE