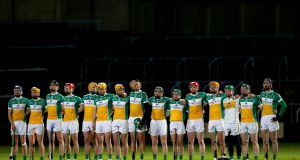 Offaly line up for the Allianz League clash against Laois in O’Moore Park. Photograph: Ryan Byrne/Inpho

Should it have come to this?

The All-Ireland hurling championship has rarely been more open or egalitarian so there is a bitter irony that Offaly, the shining light of underdog hurling, are fighting just to stay in touch.

Last month, county chairman Tommy Byrne told delegates at the county board meeting that the consequences of dropping out of Division 1B would “be terrible for Offaly hurling”.

Hard to argue. On Sunday, they have to beat Carlow to avoid that fate. Already consigned to playing Joe McDonagh Cup hurling this summer, relegation to Division Two would complete a startling fall for Offaly hurling – the county so long renowned for their erratic brilliance.

This year marks the 21st anniversary of their last Liam MacCarthy Cup win. Manager Kevin Martin, a wing back on that famous 1998 side, has, like others before him, struggled to restore any sort of consistency to the senior performances.

The league has been chastening from word go, with a thumping 2-28 to 0-7 defeat to Waterford on opening day. A year earlier, Offaly had opened their league campaign in Croke Park with an unexpected and hugely heartening win against Dublin. This was a stark reversal.

Speaking with Midlands Sport’s Will O’Callaghan after the Offaly loss, former captain Brian Carroll issued a sincere warning of what lay ahead. Established performers like Joe Bergin and Shane Dooley had been absent from the team but still, this was a low.

“These players might not be playing next year,” Carroll pointed out.

“These are all 30-plus. We only have two younger players in Cillian Kiely and Oisín Kelly to come back in. When you look at the field it is sobering. Maybe a lot of people outside the county will say: what has happened Offaly?

“But this has been coming for years and anyone who has been willing to listen will understand that. And maybe, after looking at that, relegation wouldn’t be the worst thing. These players are giving everything for Offaly but it is very demoralising for them.”

It was. Nobody is pointing the finger at Martin, who has done everything possible to breathe enthusiasm and innovation into a tough posting. Sprinter Dave Matthews and sports psychologist Anne-Marie Kennedy are recent additions to his back room team.

But the ability to clone the Dooley and Pilkington brothers is not in their considerable skill set. Martin chose not to be interviewed for this article, as did chairman Tommy Byrne. But if Offaly do make the drop, it will leave the county further away than ever. Could this have been avoided?

“The answer to that is a most definite yes,” says Liam Hogan, the former Ballyboden St Enda’s manager and former Offaly Review chairman.

Hogan has been a passionate advocate for the revitalisation of the sport in his native county. In 2017, he resigned his role as chairman of the review and voiced his frustrations at the county board. He has no wish to rehash old arguments but is adamant that the Offaly hurling collective could have avoided Sunday’s bleak scenario.

“I am not going to point fingers at other people unless I’m prepared to point it at myself. Because I am to blame as well. I was part of Offaly hurling when we should have seen the writing on the wall and didn’t. When the college in Birr started to slip, we should have asked why.

“We last appeared in a Leinster minor final in 2003 and under-21 in 2007/8. Because clubs like Birr and Killoughey and St Rynagh’s were doing so well, it masked underlying problems. It is easy to be wise in hindsight but Birr Community School began to fade in around the time Brother Denis [Minehane] * retired.

“There was no succession planning. And that is my fault and the fault of others in south Offaly clubs that we almost left it to Brother Denis and other teachers in Birr Community School to do what we should have been done. They were the providers of the majority of the players on teams. When that started to slip, so did Offaly hurling.”

When people ask Hogan about where his coaching is now, he tells them he has graduated to the Coolderry nursery. Given his experiences with the teeming numbers in Ballyboden, the comparison with his local club is revealing.

He points out that Coolderry National School has 96 kids, half of whom are girls. Coolderry club has 40 players between the grades of U-11 and U-18.

“In total,” he emphasises. They have nine under-17 players. “But we have always been that way. And six of those are on county development squads.”

Johnny Kelly, the former All-Ireland-winning coach with Portumna, spent two seasons with Coolderry, guiding them to county titles. Living just a 20 minutes drive from Birr, he has an innate appreciation of the tradition of Offaly hurling and the difficulties in maintaining their punch-above-weight reputation.

“There are a number of clubs down there that would be as good as the top teams in Tipperary or Clare or Galway, if you like. The problem is there probably just aren’t enough of them. Birr is a side that seems to be improving again and clubs like Shinrone and Belmont who are trying real hard to make the braked through. If that happened it would breathe new life into the local championship.

“No doubt, the county team has taken some heavy defeats in recent years. And they are probably playing catch-up with these counties in terms of underage development. I know there is a renewed emphasis now through their centre of excellence in Kilcormac. But the schools of Birr and Banagher were vital breeding grounds for the talent they produced in the 1980s and 1990s. But it probably goes right back to the roots of the club.”

Whatever his frustrations within the review, Liam Hogan is confident that while not reflected in senior results, the structures within Offaly hurling have advanced “light years” in the past five years.

Martin Cashin, the county coaching officer, Tom Moloney, the games manager and development coaches Michael Cleary and Conor Clancy have fronted the progression of juvenile coaching in the county. In recent years, they have begun to show promising signs. But it’s a slow process.

Hogan always recalls an evening at a charity event in Kilkenny club O’Loughlin Gaels before the 2000 All-Ireland final between Offaly and Kilkenny. It was a night of fun but, speaking with the Kilkenny guys afterwards, he got a sense of the scale of the cohesive, underage coaching project that had already begun in the county.

“It took us another 14 years and a few ferocious hidings from the same Kilkenny to sound the warning bells for us.”

This weekend, they are ringing across south Offaly.

“How is this addressed?” asks Johnny Kelly.

“I don’t know. Maybe they go back and identify the talent earlier on and look at their underage development process and with greater assistance centrally then they could maybe rise again and at least compete with the top eight counties in the country, which is where they’d like to be. The reality is that if they get relegated the light becomes a bit dimmer and it is harder to see a way forward for them.”

Sunday is hardly the most glamorous occasion in Offaly hurling history. They are facing a Carlow side whose 0-20 apiece draw with Galway was one of the more surprising notes of the league. But it’s a huge day for Kevin Martin’s beleaguered senior squad. Hogan was among the supporters who watched them beat Carlow a week ago in snowy conditions in Cullen Park. He is optimistic that the local support will turn out in force on Sunday.

“It is hugely important. I’d know a lot of those players personally and they work every bit as hard as the guys who won All-Irelands and have as much pride in wearing the Offaly jersey. They deserve our support. We earned the moniker ‘The Faithful County’ and we need to back that up.”

*Br Denis Minehane, a Bantry football man posted to Birr CS in 1961 who grew hurling in the school, from a B All-Ireland in 1969 to a Croke Cup in 1986. Half of the 1998 All-Ireland-winning hurling squad had passed through the school.