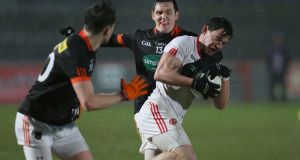 Armagh plundered a dramatic draw at Healy Park, gaining a point that gives them a fighting chance of avoiding relegation to Division Three.

Defeat would have almost certainly meant the drop for Kieran McGeeney’s men, but now they will face into next weekend’s clash with Derry galvanised by their heroics on Saturday night.

“It takes a wee bit of luck, those balls can go anywhere,” said Armagh manager McGeeney. “But I was happy in the fact the fellas kept fighting. . .”.

Already promoted Tyrone moved into a 0-3 to 0-1 lead with a couple of Ronan O’Neill scores, and despite their defensive strategy, Armagh were able to win frees, which Stefan Campbell dispatched, with Colm Watters and Aidan Forker hitting the target also.

Watters’ second strike levelled the scores late in the opening quarter, but spectacular scores from Richie Donnelly and Connor McAliskey saw Tyrone lead 0-8 to 0-6 at the interval.

Campbell and O’Neill swapped scores early in the second half. However, it was beginning to look bleak for the Orchard men when Darren McCurry opened up a four points lead, and Watters was sent off on a second yellow card 12 minutes from the end.

However, Armagh refused to surrender, and went route one in search of the vital goal, and finally hit the jackpot when substitutes Tony Kernan and Grimley combined to hit the net right at the death.