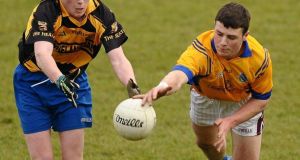 When the Marist College reached their first Leinster senior final in 15 years in 2014, and still chasing their maiden success, they had both ex-pupil Robbie Henshaw and Brian O’Driscoll in their corner.

The Athlone school may have a proud history of competing in Leinster A competition - but they have yet to win a provincial senior title, with the 2014 decider being only their third time to reach a final. And so when the school were preparing for that encounter Henshaw knew the importance and was keen to lend a helping hand.

In 2012 the Connacht centre first began to establish himself in rugby quarters, guiding the Marist to a first Connacht Senior Schools Cup in 35 years. But he was unable to end the school’s other perennial wait in football - one that still goes on.

“He is thought extremely well of in the school, a very unassuming lad,” explains senior football manager John Parker. “He just arrives into the school at times, and mixes very well with the staff and students still. He’s a very pleasant lad and we are always delighted to have him back when he does call in. And he does call in very often, since he has left.

“When we reached the Leinster final he was very good. We had best wishes from him, naturally, and he came and talked to the lads. And he organised for Brian O’Driscoll to send us a message wishing us all the best. Robbie was very close to Brian, obviously, at the time and it was nice to get it, a nice boost. It shows you about the man, and it’s great to see he still holds such regard for the school in that sense.”

Henshaw has made his name since in both a Connacht and Irish rugby jersey, but the 22-year-old starred in more than just the rugby team during his school days. Playing as a central defender he won a School’s ‘A’ soccer All-Ireland with the Marist, while also playing at midfield for both his school, his club Athlone and for his county, Westmeath, at minor level.

“A ball winner, very athletic, but really comfortable on the ball,” says Parker. “He had all the skills - which he has carried into rugby in fairness. A fantastic footballer, he would have made a fantastic county footballer.”

Henshaw has fond memories of playing with the round ball in his school days, less than four years ago.

“The GAA was brilliant in the Marist and the set-up was top class. They always looked after us. I got to two semi-finals in Leinster and played with a lot of great players who are now county players. And I think that brought me a long way in terms of my development for skills on the rugby field.

“My time in the Marist was really good in general, I made great friendships there and have great memories. It was brilliant and I just loved being involved in as many sports as possible. I think the football team has been very unlucky, they have reached a couple of finals but just come up short. I think they aren’t far off a title. The huge work put in by John Parker and other teachers like Paul Kelly, Sean Feeney, Con O’Meara and Mick Dermo has been tremendous for football in the school.

“So, yeah, when they reached the final I wished the lads the very best of luck and as I happened to be in camp with Ireland at the time they also got a few words from the main man,” he quips about Ireland’s record cap holder Brian O’Driscoll.

Henshaw recalls his All-Ireland soccer success as “probably my first best sporting memory in the Marist,” and while he also was a two-year Westmeath minor his “love for the game of rugby” always shone through: “I just always enjoyed the physicality”.

That physicality also helped him in his Gaelic football endeavour, but in two of his three senior years the Marist were knocked out by St Mary’s Edenderry. From 2009 to 2012 the Offaly school reached two of four Hogan Cup finals, but the Marist put it up to them on both occasions they met with current Westmeath forward Callum McCormack and Henshaw’s Connacht teammate Jack Carty among the talented multi-sportsmen on those teams.

“He (Henshaw) played at midfield for us against Edenderry in the Leinster senior championship and he was the man of the match on the day. Edenderry went on and won the All-Ireland after but he was certainly the best man on show,” recalls Parker. “And Edenderry had an excellent midfield pairing that day (Kildare footballer and former AFL player Daniel Flynn was playing in 2012), but he took both of them out of it. He was just an excellent footballer.”

Henshaw thrived on the intensity, particularly in the heat of Leinster championship. While the skill sets involved were complimenting his rugby ambitions too. It was a win-win situation.

“Schools football was always very serious. I noticed that every time we went out to play in the championship the intensity level would raise to a different level, similar to schools cup rugby. I played with and against some lads from the Marist and Athlone Community College who are now currently playing for Roscommon, Westmeath and Galway and are top class players.

“The GAA would have helped my aerial skills and kicking skills, fitness and footwork. If you’re able to catch a rugby ball over your head in rugby it’s a great skill to have in your game. Not many players can actually do it. The chest catch in rugby is a bit different, you have to time your run precisely and attack the ball upwards where over the head in GAA you have more time to get your leap and you can run back towards the ball. I think the margin for error is less than in GAA.”

While the art of fielding for rugby players with GAA backgrounds is often highlighted, Henshaw also feels he benefited hugely from simply kicking the O’Neills.

“The kicking, being able to punt the ball in a straight line like a simple kick pass in Gaelic, that was another big skill that crossed over.” Not to mention the athleticism too, so much so that he says he’d consider a Sean O’Brien-like return to the game: “For preseason, definitely. Just to get my fitness levels up and to have a bit of craic I suppose!”

This weekend the Marist go in search again of that first title, with a semi-final against defending champions Good Counsel on Saturday. Henshaw has a busy weekend himself - he’s set to make his return from injury for Connacht, with next month’s Six Nations edging closer. As ever though he’ll make time to check up on his old school, as they attempt to finally secure that elusive Leinster championship.

Keep an eye out on Monday for more from our Schools Sports series, including more features, squad lists and fixtures from all four provinces in the Hogan Cup.