Goals the difference for Cork as they reach league final 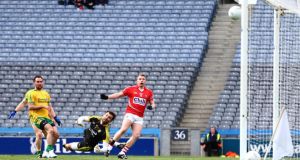 If the worth of this league semi-final was always likely to be tricky enough to locate, the lack of grievous consequences whatever the result at least freed both sides up to stitch an entertaining game together. For a team only five weeks away from an Ulster Championship opener against Tyrone, Donegal seemed oddly keen to buy themselves another game.

One conspiracy theory bouncing around was that a league final place would at least mean their players would be spared club duties completely between now and May 17th. Whether in jest or not, Rory Gallagher’s side certainly came out for the first half at least with a bit of intent about them.

They had the better of that opening period, albeit that the sides went in level at the break. Perpetual movement kept Cork on the back-foot and when it came time to shoot, the made more than they missed. Patrick McBrearty was in sparkling form at the point of the spear, clipping a couple of especially tidy points inside the first 10 minutes.

Odhrán MacNiallais, Michael Murphy and Karl Lacey all got in on the act and but for a smart save by Cork goalkeeper Ken O’Halloran, Colm McFadden would have finished a terrific necklace of passes to the net to push Donegal into a commanding lead.

But Cork hung in there. Fintan Goold bombed on from midfield to pick up three first-half points and followed it up with another in the second. Conor Dorman and Colm O’Driscoll both took neat scores and though Colm O’Neill was pretty well shackled for much of the half by Neil McGee, he did escape to nick a point just short of the whistle.

His other contribution was more telling though, showing great strength to catch a high ball over McGee in the 19th minute before turning and flicking a square pass for the onrushing Tom Clancy to score Cork’s first goal. Only for it, Donegal might have been out the gap by half time but it kept Cork level on at 1-8 to 0-11 at the break and that proximity ultimately proved telling.

Because despite the fact that Donegal had the better of the first half, two Cork goals shortly after the break tested their interest in the fixture to the fullest extent. First Colm O’Neill punched home a dropping ball that came back off the upright, then Brian Hurley turned Paddy McGrath before placing a stunning shot into the top corner. All of a sudden, Cork led by 3-9 to 0-11 and it was hard to make a case for sticking out the rest of the afternoon.

To Donegal’s credit, they didn’t just leave it at that. Maybe their pride was stung at being seven points down despite having played the better football but whatever it was, they inched their way back. Martin McIlhinney surged through for a couple of fine points, McFadden, Murphy and McBrearty kept their end up as well.

With 23 minutes to go, the margin was down to just three points and when Christy Toye came off the bench his first involvement was to put McBrearty in for a goal chance with the pass of the day - a raking 40-yarder in behind the Cork full-back line. A goal and it was game on.

But O’Halloran rushed out to pull off his second save of the game to deny McBrearty and within five minutes, O’Neill had nailed his second goal down at the other end. Any notion Donegal had of pushing matters ended with it and Cork ran out the clock in total comfort.