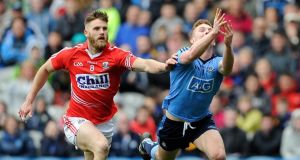 History-making has never seemed so routine. Dublin totted up a three-in-a-row of National Leagues for the first time, and needed no more energy to do so than whatever it took for them to plonk their feet on the floor at the side of the bed yesterday morning.

They were presented with a curiously hapless Cork side and wolfed them down without a second thought. A final score of 1-21 to 2-7 only hints at what a non- match this was.

Dublin pushed up on Cork’s kick-outs and squeezed them onto the back foot from the first whistle. They had five points scored before Cork had one. They had 1-15 on the board before Cork found a score from play. Brian Cuthbert’s side weren’t so much beaten as ransacked, their defences exposed as perilously inadequate long before the end.

Jim Gavin watched his players scythe through a Cork attempt at a blanket defence, but won’t have learned anything especially new about their ability to run up a score. They were able to missed a hatful of chances here and still yawn their way to the end.

Where Cork go from here is another matter. This was abject stuff. They set up with 12 and 13 men back but could neither stop Dublin scoring nor keep possession long enough to work their own chances. Colm O’Neill and Brian Hurley were desert islands at the other end of the pitch for most of the game, remote and unreachable.

Mark Collins dropped deep, presumably with the intention of mopping up ball and starting attacks.

Instead, he spent his day chasing Philly McMahon and in the end did well to keep the twice All-Star-nominated defender to just a point.

“We certainly did our best to try to deny the Dubs space to play in the first place,” said Cuthbert.

“There were plenty of times we got the ball back and came out with it, but our transition speed was just too slow. We didn’t get the ball out quick enough and we didn’t operate a proper system of linkage.

“If you look, there were four or five block-downs on us in the first half. There was balls kicked into the corner from 50, 60 yards for lads to run on to, but we just didn’t provide that linkage.

“We didn’t use the possession we had well enough, we didn’t support well enough. Hats off to Dublin; they were outstanding today and we couldn’t live with them.”

For Dublin, the machine keeps turning over. They won here without Paul Flynn and Michael Darragh Macauley – both of whom Gavin might have played if the stakes had been higher.

They lost Rory O’Carroll in the first half. None of it mattered.

Connolly was the only starting forward not to score, but he sprayed passes around like Glenn Hoddle in a dream state.

Ciarán Kilkenny ended what had been a patchy league with his best performance in two years. Jack McCaffrey took man of the match as marauding wing-back; Cian O’Sullivan was just as worthy of a shout minding the shop at number six. Though this was no test, Gavin arrives at the end of the league happy with his options.

“That is what we are focussing on. It’s five weeks away now. It’s a good way to finish this phase of our campaign for the year. We have learned a lot, some things have worked for us, some haven’t. That’s part of the process really.”

In the first game, Roscommon took home the Division Two title after a 1-17 to 0-15 victory over Down. They took advantage of a spare man after Down’s centre-back Brendan McArdle was harshly sent off near the end of the first half and kicked for home after the break. Full-forward Senan Kilbride was in especially fluent form, kicking four points from play.

It was a terrific performance all round, much to the delight of manager John Evans, who used his post-match press conference to project a big future for his young team.

“Roscommon have been starved of success,” he said. “The biggest problem now is trying to keep a lid on expectations. If this takes the edge off us, it’s no good.”

How far can ye go?

“The top. I remember one time, about 25 years ago, I walked out of an AGM after a team, Knocknagoshel, who had gone from division five to four to three, said they wanted to stay there. I said I would have no part in it.

“The whole idea is to get to the top. It will take us a couple of years. If we can stay in the first division for three to four years and prepare properly, absolutely I think we will get there.”

The top being an All-Ireland?

“Of course it is. There is no other way. Absolutely. And look, I have gone through every team. There is a lot of them, and they will be losing a lot of star players over the next two, three, four years. We will be growing in stature.”

What about this year? Is making it to Croke Park the least of your ambitions?

1 Andy Farrell ticking all the boxes in advance of England showdown
2 Ireland wary of Peyper calling the tune as they head for Twickenham
3 Owen Doyle: Day of the jackal may be coming to an end
4 Players impressed with Bono’s Irish pride and desire
5 Sonia O’Sullivan: Four into one won’t go as Irish sailors vie for Tokyo place
Real news has value SUBSCRIBE