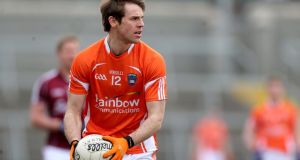 Armagh’s Kevin Dyas: his athleticism reminds you of why he was an attractive proposition for AFL scouts as a teenager. Photo: Ryan Byrne/Inpho

The absolute drizzling pity of Armagh’s strop with the scribbling nibs of the press room has nothing to do with column inches devoted to them or whatever inconveniences they might imagine it has caused.

No, the dreariest consequence is the simple fact so much hot air has been expended on something that couldn’t possibly matter less, meaning that Armagh haven’t been given anything like the credit they deserve for the football they’ve played and the developing they’ve done over the past 12 months.

The distance travelled from Breffni Park in May 2013 is immense. That it has been dismissed in plenty of quarters as just a pat adoption of the blanket defence is mainly down to the fact that there’s a limited amount of space, time and headspace that most people will apply to any one team. In the general consciousness, Armagh have become The Team That Don’t Talk. Everything else has melted away.

They beat Meath more handsomely than the five-point margin suggests, with 10 different scorers. To kick 18 points on the rotten night that was in it was good enough in and of itself; to kick all but two of them from play was exceptional.

The key to a successful blanket defence is an ability to transform it into a blanket attack. It’s what stifled the threat of promising teams like Cavan and Roscommon and what could very well do for Monaghan in the second game tonight.

Armagh looked in the early rounds of Ulster that they’d fall foul of the same problem, especially in the two games against Monaghan.

They’ve flowered since, however. Transition through the middle third of the pitch has always been something emphasised by Kieran McGeeney and his stamp is all over them now.

Armagh have a shout here, no question. The nagging doubt has to be over the quality of opposition they’ve overcome. Tyrone were a muddled hotchpotch by the time they faced them. Cavan showed nothing, Roscommon needed to spend more time trying to beat them and less trying to stop them. Meath were dire.

Granted, they all had to be beaten and you wouldn’t have been slapping your thickest wad down on them overcoming that foursome at the start of the summer. But nothing they’ve faced so far will compare to the level of organisation, fluidity and ruthlessness that Donegal showed in the Ulster final.

Jim McGuinness’s side aren’t back to the point they were in August 2012 but that is no slight because those were a special few weeks for them. What they are right now is a professional, focused team that knows what it is about down to the last full stop.

The addition of Odhrán Mac Niallais has been seamless, the return of Christy Toye has brought intelligence to what were already smarter than average bears. Ryan McHugh was the player of the Ulster Championship, just about breasting the tape ahead of Leo McLoone.

Donegal still have a fine spread of scorers – 13 from three games, which compares well with the 16 from four they were able to boast this time two years ago – but they won’t win the All Ireland without their inside line clicking.

Armagh have a terrific recent record against Donegal, losing only once in 10 games going back to 1999. And they’ve got here without Jamie Clarke properly finding his form, the drawn Monaghan game aside. It’s entirely feasible that he could stick 1-3 or some such and see them into an All-Ireland semi-final for the first time since 2005.

But Donegal are further down the road and they have a swankier destination in mind. Should be enough.