At 2-09 to 0-4 down, beaten Mayo champions found themselves in an alternate universe 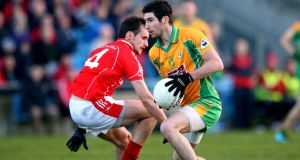 They may have taken a leisurely and, at times, frustrating route back to the top but Corofin won their sixth provincial title in sublime fashion on Sunday.

The 2-13 they cobbled together included just two frees and the invention and economy of their scoring left Ballintubber grasping at shadows.

The Mayo club had moved like a tornado through their native county and came into MacHale Park full of momentum, but they simply couldn’t live with one of the most experienced and hard-working club teams in the country.

Gary Sice’s 38th-minute goal placed Corofin in an unassailable position: 1-8 to 0-4 ahead and rampant in every sector of the field.

Throughout their Galway campaign, Corofin made it clear that they had finished with the defensively conservative set-up in favour of a more expansive and attack minded game. They were a joy to watch here.

Their work ethic and attention to defensive detail is as strong as ever but the quality and vision of their kick passing and their willingness to try things rewarded them from the beginning.

Ian Burke destroyed any plans Ballintubber had to contain him in the first half, with an exhibition of ball-winning and tidy shooting, while Michael Lundy is emerging as one of the most creative forces in Galway football.

Michael Farragher, the team captain, had an exceptional game and it was his long, perfectly judged ball which sent Burke tearing for home before squaring the pass for Sice to slide home at speed.

After that, the dam burst: Ronan Steede clipped a quick point and in the 40th minute, Corofin struck again, Farragher the provider once more for Sice to return Burke’s gift by squaring a ball for the corner forward to palm home.

“Maybe it was comprehensive on the score board but on the pitch it was anything but” Burke maintained afterwards. “We were pinned to our collar right until the end and luckily we got scores at the right time.”

It was a generous appraisal but hardly one that Ballintubber will note when they sit down to review their season.

At 2-09 to 0-4 down, they found themselves in an alternate universe, shipping the kind of frightening score which they themselves had handed out over the course of their campaign. Their rate of progression over the past seven seasons has been staggering and if they are to realise their national ambitions, then this defeat may be of long term value to them.

They were penned in from the beginning, struggling to win their own kick-outs and under ferocious pressure as they tried to work the ball out of their defence.

Too often, they were limited to kicking long, optimistic balls into the O’Connor brothers which the Corofin defence mopped up with ease.

A quick free by Cillian O’Connor gave Alan Dillon the opportunity to fire home a well taken goal to take the bare look off the scoreboard but even after that, there was real kick from the Mayo champions.

Although they were notionally in the game at half time, trailing by just 0-7 to 0-4 - all points coming from Cillian O’Connor - it was obvious that they were meeting a team that was operating on a different plane of experience.

Corofin provided living proof of the result of all those interminable summer training sessions so they can play these games in the dead of winter. They moved so comfortably and smoothly it was as if they could have found a team mate blindfolded.

It wasn’t just the accuracy of their passing that impressed but the weight on the kicked ball was perfectly placed, enabling Burke and Lundy to take possession at speed and the short passes to runners coming off their shoulder repeatedly sliced the Ballintubber defence open.

But some of their points, in particular Burke’s early scores, were stunning.

“That was more to do with the other forwards and their movement and the quality ball that came in, it was easy to kick them over at the end. It was the work of the other forwards, off the ball and giving good ball that helped me a lot in the opening few moments.”

This is Corofin’s first winter with the Shane McGettigan Cup since 2009. They are slowly closing in on Clann NaGael’s record of seven Connacht championships, but after a decade of bossing the Galway scene, they surely have All-Ireland ambitions on their minds at this stage.

They face a journey to London next to play Tirconnail Gaels and if they negotiate safe passage through that match, they will play the Leinster champions in the New Year.

For Ballintubber, the season ends with a resounding defeat and there was the sense that this game just passed them by but there they have sufficient youth and talent to return to this stage in the winters ahead.

Chances are that they will meet Corofin again,too.