Cork blow away Armagh to book another Croke Park showdown 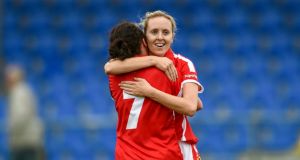 The Rebelettes will contest their ninth final in ten seasons on September 28th when they face off against Leinster champions Dublin at Croke Park.

Cork, current holders and winners of the All-Ireland senior championship in eight of the last nine years, will start as raging hot favourites against the 2010 champions after baring their teeth against a highly-rated Armagh.

But Cork blitzed them as Nollaig Cleary, holder of eight All-Ireland senior medals, came off the bench to illustrate the depth available to manager Ryan.

Cleary kicked 1-3 from play in the second half and her goal, in the 38th minute, knocked the stuffing out of Armagh at Glennon Brothers Pearse Park in Longford.

Cleary netted with her first touch to send the Leesiders 3-9 to 1-6 clear, and effectively out of sight.

Captain Briege Corkery and 2013 player of the year Geraldine O’Flynn drove Cork forward and Armagh, who lost by just a point against the Rebelettes in last year’s qualifier, were simply overwhelmed.

Orla Finn justified her inclusion in the starting line-up with three points from play on a day when eight Cork players were on the scoresheet.

At half-time, Cork were 2-6 to 1-4 clear and in a dominant position, with O’Sullivan and Grace Kearney striking for goals.

And yet it was Armagh who got off to the better start, recovering from two points down to move 1-2 to 0-2 clear by the ninth minute.

That was the cue for Cork to respond with an unanswered 2-4 to gain firm control of proceedings.

Cork’s first goal was scored by O’Sullivan in the 16th minute, with Kearney adding the second eight minutes before half-time.

Referee Gus Chapman consulted with his umpires before allowing the goal to stand, amid suspicion that Kearney was in the square when she touched home O’Sullivan’s pass.

Kelly Mallon’s point in the 24th minute ended a barren spell on the scoreboard for Armagh dating back to O’Hanlon’s penalty.

Mulcahy shot wide with a goal for the taking and Armagh clung on to Cork’s coattails at the break, with Niamh Henderson clipping over the final score of the opening half.

But Cork were immense after half-time and after Cleary found the net, further goals followed from Rhona Ní Bhuachalla, also with her first touch after coming on, and prolific corner forward Mulcahy.

Cork were 20 points clear, 5-16 to 1-8, before Siobhán Mackle registered a late consolation goal for Armagh.