Down unlikely to be capable of halting Dublin’s winning ways 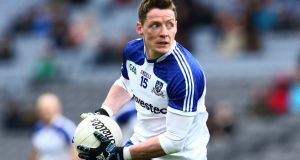 As Monaghan’s most potent attacking player, Conor McManus has been targetted by opponents. Photograph: Cathal Noonan/Inpho.

Throw-ins at 7.0 unless stated

It was after a defeat here four years ago that then Dublin manager Pat Gilroy remarked that his team weren’t anything special without the intensity they brought to their best performances.

Although the holders now occupy an entirely different place in the scheme of things there were signs of the same danger of lassitude when allowing Cork build up a big half-time lead.

Down’s calamitous return to Division One has resulted in the worst scoring difference (-44) in the whole of the four divisions and critically in the context of this fixture, averaging just 7.5 points per match.

What do you think?

This pairing has provided some testy encounters in recent years but only a week after Cavan’s principal current blood feud, with Armagh, turned out to be a damp squib.

The visitors have been in impressive form since blowing away Meath’s seven-point interval lead in Navan.

Fermanagh have been pulling up the drawbridge in home league matches and haven’t lost one in their own county since Roscommon won here just over two years ago.

Seán Quigley is back after suspension but with Seán Johnston reborn, Cavan are currently shooting the lights out. Away win.

Appositely for the only constituency to give the party a break, Westmeath have been like the Labour party in recent years – soaring up and tumbling down – and this weekend just two years after playing Tyrone in Division One, the county is in a crucial relegation four-pointer on the Ennis Road.

There is better in Westmeath and they need to start playing to their strengths, eg John Heslin. They can steady here against a home side with a few injury concerns.

Throw-ins at 2.0 unless stated

After an impressive start Cork are living the nightmare, including coughing up another big lead against Dublin to lose their third match on the spin.

Monaghan haven’t been faring much better, losing their last two in tight finishes.

Their problem continues to be the dependence on Conor McManus, who is weekly targeted by opponents as the only viable provider of big scores.

Cork’s forwards are menacing though and no county has scored more goals in the entire league. Colm O’Neill impacted against Dublin until running out of steam on his first start of the season and with Peter Kelleher scored the only goals Dublin have conceded so far.

O’Neill was the star turn a year ago when Cork’s greater economy won the corresponding fixture. Another tight encounter with perhaps a similar outcome.

Kerry are better placed going into this with a couple of wins chalked up but their record in this fixture is terrible. Mayo are after a fifth successive win and have only lost to Kerry twice in the league since the current structure was adopted in 2008.

The home side are struggling with player unavailability – Cillian O’Connor and Keith Higgins plus the Castlebar contingent. Under Stephen Rochford’s management to date Mayo have defended well – only Dublin have conceded fewer goals – but they’re struggling to score and it goalkeeper Robbie Hennelly who hit the winning scores last week in their first success of the campaign.

The defence will be put under the usual pressure with Kieran Donaghy likely to see action on the edge of the square. Kerry had to scrap last week against Donegal. Mayo’s turn this time.

A great season so far for Roscommon, whose pre-season favouritism to return whence they had come now looks miscalculated.

Selector Liam McHale said on Newstalk that Roscommon had targeted the league in order to give it their best shot and results to date have been encouraging.

This will be a tough gig in Letterkenny though.

Donegal are still licking their wounds after the brawl in Tralee but may well have Neil McGee available unless the CHC organise a hearing before the match and they will present a physical challenge that might not suit the visitors from Connacht.

Both sides are on six points and the winners are nearly in the semi-finals. Last week’s jolt can trigger a response from Donegal despite Roscommon’s three-match winning sequence.

Meath still look shell-shocked after the second half against Cavan two weeks ago. They did recover in time to nick a draw in Galway but only after throwing away another big lead.

Tyrone are taking the promotion express and with Ronan O’Neill suggesting that maybe his time has at last come, they look too strong although they will remember the fright Meath gave them in last year’s championship.

Laois have had a poor campaign and need to harvest points here if relegation isn’t to become more than a pressing possibility. Last week’s walloping by Fermanagh requires a response but Derry mightn’t be in the mood.

Mark Lynch returns to the bench after missing out recently and if they can set aside what feels like the umpteenth defeat by Tyrone this season they can travel hopefully and arrive.

Trauma of the week went to Armagh and manager Kieran McGeeney’s glum reaction after getting annihilated by Cavan.

Galway had their own slip-up, letting Meath back off the hook but they won here in the championship.

Armagh have Ciarán McKeever back in the team and will surely show more backbone given their manager’s decision to act as lightning rod for the on-field deficiencies.

Tipperary won’t want to let Clare create a gap in second place and despite Longford’s excellent recovery in Sligo, Darren Gallagher’s 1-2 off the bench and surviving having to finish with 13 men, Tipp’s goal-scoring potential can steer them through.

Cian O’Neill hasn’t been bowled over by the quality of his team’s performances but as Niall Kelly was saying during the week, building a sequence of victories with improvement needed is better than playing well and losing. Niall Carew’s return home is likely to be less than joyful.

Offaly have a good home record but Clare have been a revelation. David Tubridy hit five from play in the rout of Westmeath and Colm Collins’s team have the best scoring difference in the division. That form can give them a shot at the points.

Leitrim created a surprise last week by halting Louth’s 100 per cent record. London haven’t had much to celebrate so far – a situation unlikely to change this weekend even though they put it up to leaders Antrim last week.

Carlow, buoyed by Darragh Foley’s exceptional marksmanship at full forward and despite Brendan Murphy’s black card before half-time, secured an overdue win in Aughrim and will be upbeat facing a Louth team who lost for the first time last week. Louth though can bounce back.

Waterford came up narrowly short against Wexford but that won’t sustain them on a long trip to face the leaders, who are kicking on for promotion.

Wexford made heavy weather out of the trip to neighbouring Waterford but should come through here against Wicklow, whose first home defeat by Carlow since 1979 has hardly improved morale.