By 2020, most new electric vehicles coming on the market are going to have ranges of 500km or more, completely dispelling myths around capabilities 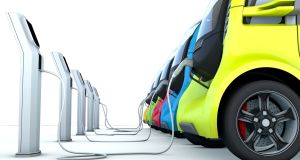 Fast charge: Chargers with capacity of between 150kw and 350kw compared with the current fast charging rate of 50kw are on the horizon. Photograph: iStock

What are your thoughts on electric cars? Too small, too slow, too much hassle? Myths and misconceptions abound when it comes to electric vehicles, yet the latest generation can give petrol and diesel cars a run for more than their money, explains Graham Brennan, EV programme manager with the Sustainable Energy Authority of Ireland (SEAI).

Did you know the very first cars were electric? “They were very popular in America in the 19th century. They were very easy to drive, there was no gearbox, they could do 20 miles per hour and people loved them.” Along came Henry Ford, however, and with the easy availability of oil, the electric car fell by the wayside.

Brennan admits that most people’s first encounter with an electric vehicle was “either a milk float or a golf buggy”. Powered by a lead acid battery that had to run down completely before being charged, these were certainly not the stuff of epic road trips. Yet the development of energy-dense lithium batteries proved a game changer and led to the first wave of electric vehicles around 2010.

“It could charge to a higher voltage and could therefore carry more energy per kilogram. This meant you could carry and propel a modern-sized car, and even put the kids in the back.” Another advantage of lithium was the fact that it could be partially charged; “the battery could take more cycles and was more robust.”

Growing pressure on European car makers during the 2000s regarding CO2 and energy efficiency labelling led to a surge in popularity of diesel cars – and we all know how that ends. Further developments in battery technology by the IT industry meant electric vehicles were ready to capitalise on the diesel emissions scandal, according to Brennan.

Comparing a diesel car with a full electric car, the energy costs are 75-80 per cent less

“The chemistries used by Tesla and the new Nissan Leaf mean the batteries have up to eight times the storage density of the original lead acid batteries.” This means an exponential increase in range and, of course, convenience. The milk float is a distant memory, and the perception of electric cars as run-arounds is completely out of date.

According to Brennan, in just the space of a few years there have been radical transformations in the spec of electric vehicles. “The original Nissan Leaf was tested at a 175km range after one charge of a 24kwh battery; the latest model offers a 380km range with a 40kwh battery.” And, if it’s within your price range, the Tesla model offers a 600km-plus range with its 100kwh battery.

“Chargers have also come on in leaps and bounds, whether it’s at home or on the street. The normal chargers use AC electricity, which is converted by the car into DC electricity.”

Yet with fast chargers, these do the conversion for you – meaning rapid charging. Chargers with capacity of between 150kw and 350kw compared with the current fast charging rate of 50kw are on the horizon, adds Brennan.

“By 2020, most new cars coming on the market are going to have ranges of 500km or more, their batteries will be 80-100kwh. You will be able to pull into a petrol station and you will have the choice to get most of your charge done within 20 minutes, or what you need to finish your journey in just five minutes.”

The goal is to have several chargers in each station, he notes.

“We don’t want the concern to be, is that single charger working and unoccupied; we want to have multiple chargers at each point that are easy to use.”

The environmental impact notwithstanding, how hard does the current crop of green vehicles hit you in the pocket? Brennan points out, like with any new technology, prices are falling steadily even as capability increases. “They are getting cheaper all the time. And comparing a diesel car with a full electric car, the energy costs are 75-80 per cent less.”

By 2025, electric vehicles are expected to be the same price as conventional cars

And when it comes to maintenance costs, there is no comparison. “The engine is far less complex, there are far fewer moving parts, there’s no oil, there are no filters, there’s no gearbox. Take all of that junk out of it and you are left with this very compact and highly reliable vehicle.”

Manufacturers are so confident in the new generation of batteries, the original five-year warranties have been extended to eight years, adds Brennan. “If the battery loses more than 25 per cent of its original capacity during that time, they will replace the battery pack. They are starting to get very confident about the life of these batteries.”

What does the future hold? According to Brennan, the uptake of electric cars looks set to increase dramatically, driven by the increased range and reliability, as well as other factors such as growing concerns regarding diesel emissions. This will happen sooner rather than later, he says.

“By 2025, electric vehicles are expected to be the same price as conventional cars. We need better infrastructure and key motorway locations on routes between the major cities. But the costs of the batteries will fall, the performance will get better. And with the increased popularity, we will see air quality in our cities begin to improve and the positive impact of that.”

Up to 40 electric vehicles are available on the Irish market and qualify for an SEAI grant.
These include models from:
Audi
BMW
Citroen
Hyundai
Kia
Landrover
Mercedes Benz
Mitsubishi
Nissan
Porche
Renault
Tesla
Toyota
Volkswagen
Volvo