In the wake of the Brexit vote, we launch a series championing Ireland’s global export potential 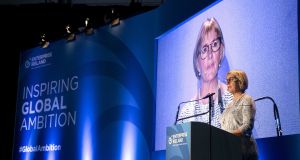 The Irish export market is thriving. Export sales for 2015 reached a high of €20.59bn, a 10 per cent increase on the previous year, with growth recorded across all sectors from construction to life sciences to food and drink.

Championing all of this is Enterprise Ireland, the government organisation responsible for the development and growth of Irish enterprises in world markets. They work with Irish business to help them start, grow, innovate and win export sales in global markets. To build on this success they have launched the Global Ambition campaign, a major initiative to drive their role building international markets even deeper into the success story of Irish export business.

The campaign was launched at their recent International Markets Week in the RDS, an event that brings 140 representatives from Enterprise Ireland’s various offices around the globe home to meet and mentor Irish business leaders.

More than 400 Irish companies seeking to expand their market and create new partnerships in different territories took part in the event holding some 1,400 scheduled meetings with Enterprise Ireland staff.

It’s an incredible initiative that connects expertise, opens key doors and identifies opportunties in the right countries for their product.

In the wake of the Brexit vote last June, the International Markets Week, which has been running for a number of years but took on a new expanded form this year, “Puts a new level of intensity in the appetite for clients,” said Enterprise Ireland chief executive Julie Sinnamon.

“We did a survey of the clients as they were registering and nearly 90 per cent of them are saying, ‘We want to diversify,’ and there is an increasing focus on companies needing to spread the risk in terms of the portfolio of markets that they are supplying.

“It’s the closest thing to speed dating that we will admit to in Enterprise Ireland. It’s speed business and about giving those businesses the opportunity to meet with our staff. For some companies who are already in the marketplace it gives them an opportunity to connect with those people in Enterprise Ireland again; and in some of the far-flung markets to make sure that our staff are up to speed with what the plans for the company are.”

Enterprise Irland organise the world market into the Americas, Asia-Pacific, Europe, Middle East and Africa, and finally the United Kingdom, with regional directors and their teams working across countries and regions to help companies win business in export markets.

The UK is one of Ireland’s three biggest markets, alongside US/Canada and Northern Europe, and the potential impact of the Brexit vote has ensured that a focus is on Anglo-Irish business relations like never before. In light of this new approach, how to deal with and thrive post-Brexit is a key element of the Global Ambition campaign.

“The UK represents 37 per cent of Enterprise Ireland client exports, so my role is to work with the team which operates throughout Britain to meet with client companies. The UK is still our largest market, not withstanding the Brexit vote last June. It’s still the sixth biggest economy in the world,” said Donohue. “We continue to grow exports to that region but the nature of those exports will change.

“There will be an impact on how companies in the UK employ people on the ground as it’s estimated that 200,000 Irish people are employed by Irish companies in the UK market. And then there is the problem of currency fluctuation and the potential for new costs such as tariffs. We are working hard to ensure that our clients are kept well informed and are responding to changes. Our focus is on what we can do to use the situation to expand and grow our business. It’s a very uncertain time but also a very exciting time for companies to grow.”

Further afield, in Asia-Pacific, Tom Cusack fills the same regional role as Donohoe. He presides over seven offices in the region: Sydney, Australia; Singapore; three in China (Shanghai, Beijing and Hong Kong); Tokyo, Japan; and Seoul, South Korea. It’s a market grouping that is currently worth €1.6bn for Irish business and with a population of over 4bn people it represents the biggest potential market within Enterprise Ireland’s six regions.

“We have doubled exports in the last five years and our ambition is to double it again to €3bn by 2020. We’ve about 600 companies operating throughout the region; the big challenge is scale. A lot of companies are dabbling in the region, so a lot of our focus is on how we scale those companies at a local level,” said Cusack.

Benefits Thousands of Irish companies have benefited from Enterprise Ireland’s work over the years. Arralis is one such company. The Limerick-based IT firm specialises in designing a high-frequency radar chip set, which aids unmanned landings by spacecraft, air defence systems, drone guidance systems, airport radar, driverless cars and 5G telecommunications. Arralis met with Enterprise Ireland in late 2013, outlining their ambition, and by January 2014 had a letter of offer for investment in the company.

“We found Enterprise Ireland incredible. Once they knew where we were going they rode in and they committed from the beginning,” said Arralis co-founder and chief executive Barry Lunn.

“In 2014 we were then introduced to the space team and they connected us with the European Space Agency who went on to be our first customer. Enterprise Ireland’s role guiding us through that process was huge. The next element was the introduction of the overseas offices and engaging with the Russian and Chinese Enterprise Ireland teams. When we were about to sign our first contracts in China, the fact that Enterprise Ireland could host the customer at the embassy, including bringing the Minister to meet the customer, was crucial.”

Multi-directional forklift manufacturer Combilift has a similar story. Their managing director Martin McVicar outlined that Enterprise Ireland were crucial in terms of forming relationships and providing funding to get them established and when established to grow and thrive. This includes funding for research and development, introductions to key potential customers and also investment in staff development.

“Enterprise Ireland staff encouraged me to participate in a leadership for growth programme that they were supporting through Stanford University; this was partly funded by Enterprise Ireland and I would not have done it had they not made it possible. It opened my eyes to trying to think bigger ,” said McVicar.

“Overall, being realistic, without Enterprise Ireland’s help Combilift definitely wouldn’t be at the scale we are at today. They pushed us to lift the bar higher. Likewise, the International Markets Week is like a pilgrimage for me that I go to every year. My meetings vary from year to year but it’s always in my diary. It’s a Mecca for Irish exporters.”

Forging relationships is everything in business and it can make or break a deal or a company. Many companies fail due to poor access to appropriate networks.

Enterprise Ireland’s work as a facilitator is key to making sure Irish business has the right platform to work from and this trend shows no sign of slowing up any time soon.

For more on the Global Ambition campaign see ambition.enterprise-Ireland.com