Fintech sector is strong but challenges lie ahead 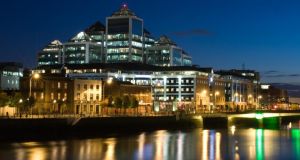 Irish firms have had a very good working relationship with the fintech industry in London. Photograph: Istock

For years the financial services industry was considered by many to be too product centric, complex, and overly regulated. The proliferation of siloed systems resulted in poor customer service experiences, not to mention distrust. In the wake of the global financial crisis, calls for greater transparency, as well as smarter and simpler service provision, were too loud for the sector to ignore anymore.

The ever-expanding international fintech sector has been able to provide solutions to many of the outdated and officious legacy systems which have hampered progress. This is good news for customers and businesses alike.

“Across industries, one of the big trends we’re seeing is a renewed focus on customer experience,” says Sanj Bhayro, senior vice president for EMEA commercial sales at Salesforce. “In fact, a study by Gartner found that 89 per cent of companies expect to compete mostly on the basis of customer experience.”

This was also shown by research conducted internally at Salesforce earlier this year. “Salesforce’s Connected Investor Report, which looked at the advisor-investor relationship, found that more and more consumers are looking for a more collaborative experience with their financial advisors that is ideally enabled through modern financial planning tools and technology. Generational shifts have also played a significant role as Millennials [18- to 34-year-olds] are entering the market and putting pressure on financial institutions to adopt new technologies with less dependency on traditional methods,” he says.

The potential for fintech growth in this country has been helped by Ireland’s continued economic openness. Much of the ecosystem required was already in place having so many multinational financial service companies located here. “The indigenous [financial services] sector, universities and the large number of Irish fintech start-ups have evolved and matured relatively quickly,” says Richard Morrissey, associate director at Moneycorp Ireland.

“In the last 20 years Ireland has been successful in two segments of financial services: dynamic currency conversion and aircraft leasing. The question now is if fintech can help us develop other subsectors within [financial services], such as peer-to-peer lending,” he says.

There have been a number of success stories already: Realex, Fintrax and Avolon, for example. Plus, third-level educational institutions have included specialised courses. The Government has also been very supportive with the IFS2020 Strategy as the blueprint for the future.

“We’ve already seen a clustering effect in some sectors with companies growing out of existing companies providing complementary products/ services to the original firm,” says Morrissey.

“Many experienced bank staff in Ireland, for example, are looking for roles outside of traditional financial organisations,” he adds.

Adoption of new financial technology is not happening at the same pace everywhere. Cultural norms in one region will hamper the progress of tech advances that might be enthusiastically adopted elsewhere.

“It’s country dependent,” says Eoin Christian, managing director of Grenke Invoice Finance. “Half of all transactions in supermarkets in Germany, for example, are still done in cash. Irish people, on the other hand, use credit cards for almost 80 per cent of all transactions.”

So trends are impacting markets in different ways. However, there are a number of key developments emerging globally.

“Consumers and established financial institutions are taking fintech very seriously. Much of the VC investment was driven by an increase in super-size rounds, like the $1 billion raised by finance company, SoFi.”

Then there is the rise in partnerships to power fintech growth.

“While some fintech services choose to focus on the unbundling of elements of a bank’s existing service offering, fragmentation detracts from the intuitive, integrated experience consumers desire. This in turn creates an opportunity for banks to help shape a best-in-class customer experience, in partnership, not against, some of the new entrants to the industry,” says Delahunty.

Lending was the most-active area for fintech investment in 2015 overtaking payments to account for 42 per cent of all money raised in the sector.

“With businesses and individuals alike becoming more aware of alternative means of financing, and models such as peer-to-peer lending gaining traction, investors are making sizeable bets on start-ups taking on traditional loan providers. However, recent turmoil at some of the better-known new entrants, highlight the complexities which still remain in the sector,” Delahunty says.

“Many have focused on specific verticals in the sector [home, life and motor insurance for example] leading to a blurring of boundaries with sectors such as health, real estate and the sharing economy,” says Delahunty.

Naturally there is a great deal of activity in fintech circles in relation to the development of digital currency bitcoin and its underlying technology, blockchain. Last year the total value of investment in bitcoin companies reached $393 million (€354 million), an increase of almost 40 per cent on the previous year.

“A number of companies are trying to set de facto standards for bitcoin,” says David Dalton, head of Deloitte’s financial services practice. “There is a consortium known as the Hyperledger Project, for example, working collaboratively to develop an open source set of standards for blockchain technology.”

So far, progress has been impressive for the burgeoning fintech sector worldwide. What no fledgling industry needs, however, is for a major political crisis to happen early on in its development. And they don’t get much bigger than the UK’s recent decision to leave the EU.

“Brexit has undoubtedly caused uncertainty,” explains Anna Scally, fintech leader at KPMG Ireland. Scally is also co-director of the Fintech and Payments Association of Ireland who held a briefing at the end of June to discuss the implications of referendum’s result.

“Up until now Irish firms have had a very good working relationship with the fintech industry in London which has already grown considerably in strength and depth. So naturally one of the big uncertainties is whether we can continue that good relationship between Ireland and London,” she says.

Then there was the recent pledge by UK chancellor of the exchequer George Osborne to cut corporation tax from 20 per cent to 15 per cent, still not as competitive as Ireland’s but significant nonetheless.

“There are still major unknowns in the UK market,” says Scally. “The amount of uncertainty surrounding everything from access to European markets, the regulatory environment and investment and [venture capital] mean a cut to corporation tax in isolation isn’t going to be enough to relieve people’s fears.”

The Irish financial services sector may feel the impact of Brexit more directly when dealing with partners in the North. Belfast and Northern Ireland more generally have attracted a number of fintech firms and synergy between companies North and South is being seen more frequently.

“To give just one example, Newry-based financial consultancy First Derivatives now has offices on both sides of the border,” says Scally.

“If Northern Ireland were to leave the EU, it would make things very complicated.”

The recent establishment of the Fintech and Payments Association of Ireland (FPAI) has been cause for some comfort in such uncertain times. As the body continues its efforts to facilitate communication and information sharing between government, business and customers, it has already been able to bring together those who need to co-operate now more than ever in the search for solutions to existing challenges.

“As part of the Government’s IFS2020 strategy, certain actions were delegated to two working groups, made up of representatives from the payments and fintech industries, and convened by the FPAI,” says Scally.

“Each group was asked to come up with a series of actions to help deliver on objectives laid out in the government plan. One such group was working on strategies to improve the fintech ecosystem. This group gave a summary of their proposals to the FPAI, which are currently still under review but will be made public in the coming months. Recommendations from the payments working group, however, can already be found on the FPAI website.”

While some commentators have been critical of reports that new fintech companies and more established financial institutions have been reluctant to work more closely together, Scally dismisses this as nothing more than healthy competition.

“I’d describe it as a nice, uneasy tension,” she says. “Ultimately, the smaller companies will want to be selling to the bigger companies. And while some financial institutions might feel threatened by all the new competition in this burgeoning industry, they have no choice but to develop and innovate.

“Besides, we saw big changes in 2015. A lot of smaller companies are now partnering with the major financial institutions to develop solutions together.”

This article appears in Future of Fintech, a special report available in The Irish Times newspaper and irishtimes.com/specialreports on Thursday, July 14, 2016.

Also in Future of Fintech

Fintech sector is strong but challenges lie ahead

No company is immune from data security threat

How to get closer to your customers

Fintech has a place within financial service ecosystem

New vision for Ireland as the choice location