Women and alcohol: A shot of reality needed

Targeting women behind rise in number presenting with drinking problems 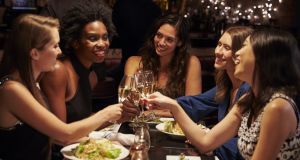 Cumulative pricing policies mean that a woman can reach her weekly recommended low-risk limit of 11 standard drinks for as little as just over €6, drinking cheap wine. Photograph: Getty Images

In the last days of August the Rutland Centre, one of our foremost residential alcohol treatment centres, published its annual report. One of the headline features was the rise in women presenting for treatment for alcohol dependence. This important and troubling phenomenon was pushed off the media agenda by the news of the Apple Corporation’s tiny tax payment to Ireland.

Apple’s behaviour notwithstanding we still have a major public health issue with female alcohol dependence in Ireland.

The roots of this problem can be found in the marketing and business practices of the alcohol industry, particularly the global leaders of the industry who have enormous economic clout which they use to promote their products while denying the impacts of problem alcohol use.

How has the alcohol industry targeted women?

According to the World Health Organisation (WHO) , three of the 10 “best buys”, the most cost-effective and feasible interventions, for preventing and controlling chronic disease relate to alcohol and involve tackling its pricing, availability and marketing.

What the WHO recommends, the alcohol multinationals always oppose vigorously. Marketing data by the alcohol industry and surveys by public health bodies have shown wine is the preferred alcohol of women, as opposed to beer for men.

The age and gender profile of alcoholic liver disease has changed radically in Ireland in the same time period – from being a disease of middle-aged and older men to affecting both men and women in large numbers with the highest rate of increase observed in the age group 15 to 34. The alcohol companies place TV adverts for wine around programmes popular with women.

On availability, there have been dramatic changes to where Irish people can source alcohol now. Every petrol station and convenience store sells alcohol, mainly wine. Between 1998 and 2013 the number of pub licences in Ireland decreased by 19 per cent, from 10,395 to 8,402. During the same period, the number of combined wine and spirits off-licences increased by 377 per cent, from 1,072 to 5,116. Is it any wonder we have problems with alcohol?

Many of the female clients presenting to the Rutland Centre – and other treatment centres and acute hospitals – have sourced their alcohol in these expanded outlets.

An additional dimension to this explosion in outlets relates to the third concern of the WHO – pricing. Competition and oversupply reduces price. Reduced price for alcohol in a society is linked to increased health and social problems.

At an international level between 1975 and 2000 per capita GDP in the OECD countries rose by 40 per cent while the real price of alcohol increased by just 4 per cent.

Public health campaigns calling for a reversal of this relentless drive to make alcohol more affordable is a hard sell; we all like cheap products just as we would all like to pay less tax. Think of our friends in Apple. Cumulative pricing policies mean that a woman can reach her weekly recommended low-risk limit of 11 standard drinks for as little as just over €6, drinking cheap wine. Does all of this matter?

Yes. Marketing has desensitised us to alcohol’s harms and more Irish women are presenting to the Rutland Centre and other organisations seeking help and care. Liver failure can result from heavy drinking, even without dependence. One in eight breast cancers are associated with alcohol.

The National Suicide Research Foundation found alcohol was involved in 35 per cent of all cases of self-harm in 2014. Alcohol has been found to be a major contributory factor to suicides in Ireland.

The Apple controversy is throwing a light on the practices of the multinational sector. A similar light needs to be shone on the behaviour of alcohol multinationals.

1 Rape victim verbally abused in courtroom after two men are jailed
2 Paraic O’Donnell: MS is meticulously destroying me. I am being unmade
3 Former UUP leader: Unionism must realise it is no longer a majority in Northern Ireland
4 Housing is at crisis point – it is time to park ideology and build
5 New network of 1,322 speed cameras comes into force today
Real news has value SUBSCRIBE