Vatican commission may lead to formal ministry for women 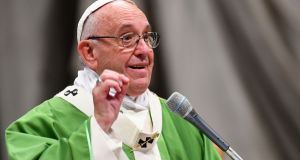 Undoubtedly there will be disappointment among some Catholics at the words of Pope Francis last week that the church’s restriction on women priests is to remain in place.

He was speaking to reporters on the papal plane as he flew back to Rome from Sweden where he had taken part in events at Malmo marking the start of the 500th anniversary commemorations of the Reformation.

Asked how realistic it would be to foresee women priests in the Catholic Church, Pope Francis said “the last word on this issue was clear” and had been given by St John Paul II.

“This stands,” he said, referring to St John Paul’s 1994 apostolic letter Ordinatio Sacerdotalis which said there could not be women priests. Asked whether this was “forever”, he said “if we read carefully the declaration made by St John Paul II, it goes in that direction”.

However, it is noteworthy that recently Pope Francis, in addressing the role of women in the Vatican, significantly raised the status of Mary Magdalene in the history of the church. He accorded her a universal public feast day to be celebrated each year on July 22nd.

The text of her Mass includes a remarkable preface in which Mary’s role is most generously honoured as apostle to the apostles.

By the same token, he has broken new ground by appointing two women to influential posts in the Vatican administration; as director of the Vatican museums and as deputy director of the Holy See’s press office. These both become two of the most visible figures in the church.

During the time when Jesus Christ was physically with us on Earth, the laws and culture of the Jewish people were extremely patriarchal; male members of the Jewish race were, in so many ways, in control of the entire social culture. The role of menfolk was all-encompassing.

A woman was the property of her father until she married and then became the property of her husband. So much so that if a woman disappointed her husband in any way he was entitled to divorce her. Moreover, a rabbi did not converse with a woman on her own and certainly did not discuss any religious topic with her.

Jesus changed all that. Womenfolk followed him on his journeys; these female followers sometimes were accompanied by their husbands but often they travelled alone in their companionship. Clearly, Jesus befriended women in His public ministry.

The Gospels famously feature Jesus’s special friendship with the sisters Mary and Martha who lived in Bethany. Once, when he was visiting them, they prepared hospitality for him. When Martha complained that Mary was neglecting to help her in cooking the meal, Jesus replied that Mary, who sat listening to him speak, was entitled to engage with him in his teaching.

This woman friend was wise enough to realise that her role as woman enabled her to participate in serious dialogue with the Master. Later on, as the infant church developed, the serious role of women, unfortunately, once more became male-dominated.

It is interesting that Pope Francis has spoken of the need to have women engaged more in the serious role of making an input into church life. At the beginning of August, the Vatican announced the appointment of a “study commission on the diaconate of women”.

This new body is significant in that it may begin a process which could culminate in a specific and formal ministry for women in the life of the Catholic Church.

The study commission on the diaconate of women consists of a president and 12 members evenly split between women and men. Of the six women, only two are members of religious congregations; the members are all European except for two from the USA and one from Africa (Rwanda).

This women’s diaconate commission is not similar to other Vatican commissions. The average age is lower than that for other commissions. Moreover, the appointees are not cardinals, bishops or church bureaucrats but scholars.

The commission has drawn on the International Theological Commission for its membership, both women and men. Once such member at least, Phyllis Zagano, has advocated openly for a women’s diaconate. How this new Vatican commission develops will be a process of singular interest to Catholics worldwide.

1 Former Kilkenny hurler dies after bike struck by tractor
2 Why you still can’t have a European holiday this summer. Or can you?
3 Nine more deaths from Covid-19 recorded in Ireland along with 24 new cases
4 One of most powerful images of War of Independence
5 Green Party’s Catherine Martin confirms she will stand against Eamon Ryan
Real news has value SUBSCRIBE