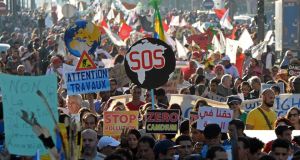 It is unwise to write history when you’re living through it. Seemingly unremarkable events in their time may be judged very harshly with the benefit of hindsight.

For example, 1616 will be recalled as the year the Vatican ordered Galileo to abandon his “opinion” that the Earth revolves around the sun.

Four hundred years later Donald Trump has been elected president of the United States of America. This could be a historical watershed in any number of areas, from the role of Nato in global security, to nuclear non-proliferation, to international trade and immigration. It is too early to tell.

What is clear, however, is that just like heliocentrism, there is an equally self-evident truth that is being denied today by the president-elect and many in his party, something that is accepted by every other leader globally.

I’m referring to the unprecedented pace of planetary warming, which is predominantly driven by the burning coal, oil and gas; and just like the Vatican some four centuries ago, so too are there institutions and individuals seeding this denial to maintain their wealth, power and status. This year global temperatures will likely breach 2 degrees Fahrenheit above pre-industrial levels. It will be the warmest year on record by far, with each passing month surpassing previous highs, alarming even the gloomiest of climate scientists.

The Paris climate agreement came into force on November 5th, just three days before the US presidential election. History would have recalled this as a milestone of immense symbolic, legal and political significance. Under the agreement, all countries have entered into a process whereby they bring forward increasingly ambitious plans to reduce emissions every five years.

Listen to our foreign affairs podcast

President Donald Trump will wreck this agreement. While it is true that he may not be able to deliver on his commitment to cancel it, and even unilaterally withdrawing would take four years, this is of little consolation.

He could much more quickly move to withdraw the US from the United Nations Framework on Climate Change, thereby ending participation in the Paris agreement (which is a protocol to this wider treaty).

Trump’s commitment to end “all payments of US tax dollars to UN global warming programs” is another way to hamstring international climate solidarity.

Domestically, a president Trump looks likely to crush the fragile green shoots of low carbon transition that are emerging. He has promised to promote the exploitation of the “vast coal, shale gas and other American energy resources”, rescind the clean power plan and support the building of the Keystone pipeline, making possible the further exploitation of the most carbon-intensive fossil fuels on the face of the planet. The plans would lead to a dramatic increase in US emissions at a time when there is a clear necessity to reduce them.

An oil industry billionaire, Continental Resources chief executive Harold G Hamm, is favourite in the running for secretary of energy, and a climate sceptic, Myron Ebell, is seen as a top candidate to lead the Environmental Protection Agency.

All of this retrograde action is enabled by a complex of faux research organisations, think tanks and lobbyists who propagate climate denial. Their benefactors in the fossil fuel industry silently pull their strings from behind the marionettes’ curtain.

These are epoch-defining developments. The president-elect sees himself as an artful negotiator, but one cannot negotiate with the scientific facts. In 2016 greenhouse gas concentrations breached 400 parts per million for the first time in four million years; and the Earth’s atmosphere will therefore trap more of the sun’s radiation, in line with the laws of physics.

The window for action is closing now, not in four years’ time. The world is on the brink of dangerous, severe and irreversible climate change with potentially devastating consequences. We all need to ask ourselves: what are we going to do to about it, and when?

It took the Vatican 350 years to formally apologise to Galileo for its geocentricism. We don’t have anything like that amount of time to accept reality. Whether we do so or not, the planet will continue to warm, just as certainly as it revolves around the sun.

Joseph Curtin is a research fellow at the Institute of International and European Affairs, Dublin, and University College Cork. He is a member of the Irish Government’s Climate Change Advisory Council