The changing face of marriage in the Catholic church

Patsy McGarry: ‘Marriage did not have much status in the early church’ 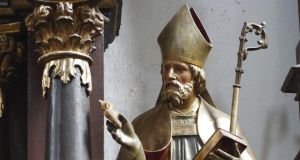 ‘St Augustine also taught that virginity was the higher way of life and best route to spiritual perfection. This view of marriage was reflected in the lack of any formal liturgy for marriage in the early church, even though it had such liturgies to celebrate the Eucharist, Baptism, and Confirmation.’ Photograph: Getty Images

One of the striking things about the marriage equality debate to date has been the proprietorial attitude adopted by some on the No side towards marriage itself. It is as if it is theirs alone to own and protect.

This is by no means the position of all on the No side, just those vocal few who once more insist that everyone should be compelled by law to live by their beliefs.

Meanwhile the great majority of Irish people seem only to want a situation whereby as many as possible can live in accord with what they believe to be right.

As retired Church of Ireland archdeacon of Dublin Gordon Linney put it recently “the claim of the churches to own marriage in any sense just doesn’t stand up because marriage was there long, long before there was ever a Christian church”. Marriage was, he said, “a civil matter”.

Those in the churches so possessed of an irresistible urge “to own marriage” might reread the gospels. There they would see that Jesus’s first miracle took place at a marriage, presumably between two Jews, and well before the movement known as Christianity began.

Marriage, in various forms, has been a feature of society the world over, regardless of religion. It, generally, has been a civil matter and was so also for much of the history of Christianity.

Rereading the gospels might also be illuminating for some who view the traditional family as father, mother, and biological children. The Holy Family of Jesus, Mary, and Joseph was anything but traditional, in their sense of the word.

Mary was a single unmarried teenage mother and her betrothed, Joseph, was not the father of her child. The fact is that marriage did not have much status in the early church. It was seen as an inferior state. St Paul wrote: “To the unmarried and the widows I say that it is good for them to remain single as I am. But if they cannot exercise self-control, they should marry. For it is better to marry than to burn ...”

This view was shared by some of the 34 doctors of the church, “super saints” who contributed much to Christian theology. One such doctor, St Cyprian (died 258), said that the first commandment given to men was to increase and multiply, but now that the earth was full there was no need to continue this process.

Another, St John Chrysostom (died 407), wrote: “. . .virginity is better than marriage, however good . . . Celibacy is . . . an imitation of the angels. Therefore, virginity is as much more honourable than marriage, as the angel is higher than man. But why do I say angel? Christ, Himself, is the glory of virginity.”

Yet another doctor, St Jerome (died 420), argued that marriage distracted from prayer, and so virginity was better: “If we are to pray always, it follows that we must never be in the bondage of wedlock, for as often as I render my wife her due, I cannot pray. The difference, then, between marriage and virginity is as great as that between not sinning and doing well; nay rather, to speak less harshly, as great as between good and better.”

In those early centuries the old Roman pagan marriage rite was used by Christians, though slightly modified.

The first official declaration that marriage was a sacrament was made at the Council of Verona in 1184. It was 45 years earlier, at the Second Lateran Council in 1139, that clerical celibacy became a discipline of the church. In other words the idea of marriage as sacrament in the Catholic tradition has existed for 831 years, less than half the history of Christianity.

Since the Reformation, various Protestant denominations identify just two sacraments as instituted by Christ, the Eucharist (Holy Communion) and Baptism.

The idea of the superiority of virginity persisted in Catholicism up to and including the Council of Trent, 1545 and 1563, which stated it was more blessed to be a virgin or celibate than to be married. It also made it a requirement that a valid marriage must take place in the presence of the parish priest and at least two witnesses.

So the Catholic Church’s teaching on the status of the married state as being equal at least to that of the virgin or celibate is a very recent phenomenon. Things change. Patsy McGarry is Religious Affairs Correspondent