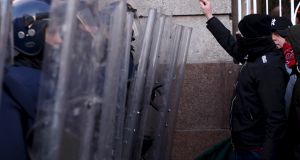 Members of the Garda Public Order Unit confront protesters at an anti-racism demonstration against the launch of an Irish branch of Pegida in Dublin on Saturday. Clodagh Kilcoyne/Reuters

The launch of an Irish branch of Pegida, the European anti-Islamisation group, and the protests that greeted it last weekend, illustrate persistent contradictory and unresolved attitudes here to migration.

Unless Irish politicians and society urgently implement ethical policies to address the challenges and opportunities posed, Pegida Ireland may mark another step towards Ireland becoming what Prof Anthony Messina, a US-based political scientist and experienced analyst of European migration policies, describes as a “normal” EU country of migration.

That involves repeating the mistakes of many EU states in adopting migration policies that fail to accord with international human rights obligations and inadequately address issues of naturalisation and integration.

Being a “normal” country of migration means adopting policies reflecting the interests of the receiving state; mass immigrant settlement eventually leading to a native backlash and formation of anti-immigrant groups; state co-operation on immigration policies primarily dictated by domestic pressures; immigrant incorporation regimes largely shaped by each state’s historical conditions, interests and dominant political actors; and settled immigrants most actively represented by parties of the left.

Ireland doesn’t yet meet all the criteria of this “normal” country of immigration but urgent action is necessary to avoid it doing so. A commitment by the next government to speedy implementation of policies that conform to basic humanitarian obligations and our international human rights commitments could slow or even reverse the process.

The first step is to admit the contradictions in our approach to migrants. We have our own long, often tragic, history of emigration, leaving a strongly ingrained collective memory of what it’s like to be an “other” in a strange land. But successive governments also continue to endorse the “Fortress Europe” approach to migrants embraced by many EU states.

We continue to maintain thousands of asylum seekers and migrants in the widely condemned Direct Provision system while appealing to the US to regularise “our” illegal migrants. And we only reluctantly agreed to take in 4,000 of the millions fleeing terror in Syria.

The 2011 census recorded that 770,000 people (17 per cent of the population), living here were born outside the country. Their presence raises many issues, including whether it is time to transform our criteria for citizenship and naturalisation. The 2004 Citizenship Referendum introduced citizenship based on blood ties, reversing the historical birth-based citizenship that applied here since 1922.

Irish academics Ronit Lentin and Robbie McVeigh have argued the referendum was a “turning point” in the racialisation of Irishness, “an act of political brutality disguised as upholding the common good”. The motivation for the change was a political determination to remove birthright citizenship from children born in Ireland unless they had at least one Irish citizen parent or a parent entitled to Irish citizenship. During the referendum campaign, then minister for justice Michael McDowell coined the term “Irish-born children” for children born here to migrants, distinguishing them from other children born here. The objectionable phrase “non-national” became increasingly prevalent, including in legislation, although it is being gradually replaced by non-perjorative terms including new communities. All of this underlines this is not the time for xenophobic fear-based responses. What is necessary is a mature and informed national debate on migration and the development and implementation of policies reflecting the reality of a multicultural Ireland.

There are some encouraging developments. Almost half the population of Ballyhaunis hails from new communities and, as The Irish Times reported last year, the local GAA club’s integration day attracted about 250 children from the local Direct Provision centre. Organiser Darren Conlan said the intention was to build respect for each other’s cultures in the hope of avoiding the consequence of exclusion evident in other countries, including the emergence of ghettoes. We urgently need more Darren Conlans. Pegida Ireland’s arrival should be a wake-up call for all of us. Mary Carolan is Courts Correspondent. Her MA thesis explored the ethics of Ireland’s Direct Provision policy for asylum seekers and refugees