‘Are we writing to the Holy Father, to the families of the church, or to the world?’ 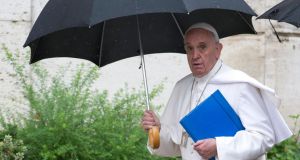 It was the late Brian Friel who coined the phrase “confusion is not an ignoble condition”.

Not many senior prelates in the Catholic Church might agree. Certainty has been their forte but confusion is their lot at the synod of bishops in Rome. They do not know what is expected of them in the final document on the family they are to agree by October 25th.

This uncertainty was evident last Friday in reports from the synod’s 13 working groups. Each is constructed along language lines and is made up of about 20 bishops.

One of the four English language groups, one chaired by Canadian cardinal Thomas Collins, said of that document “we felt limited in our ability to respond by not knowing clearly who the audience of the document is. In other words, are we writing to the Holy Father, to the families of the church, or to the world?” It is a central question.

The report from another group, chaired by Ireland’s primate Archbishop Eamon Martin, admitted that “we have been somewhat uncertain about the task presented to us”. It said “at times our work has seemed more muddled than methodical”.

Archbishop of Dublin Diarmuid Martin, secretary of a third group, told The Irish Times: “I have no idea myself what way the synod is going to go . . . we’re writing a document, or contributing to the writing of a document, we don’t know who it’s being written for. Is it written for the pope?”

Since 1975 such synods have prepared a final document for the pope who then went on to pronounce an Apostolic Exhortation (statement) which might or might not be influenced by that document.

Current confusion in Rome centres on what Pope Francis will do with such a document. He has appointed a committee of 10 to draft it with the bishops. Will he accept it and ignore it? Or accept it and issue an Apostolic Exhortation based on it? Will he bother with an Apostolic Exhortation at all? Or will he, in this new spirit of collegiality, issue the bishops’ final report as guidance for the universal church and leave it at that?

The answer to all of this rests with Pope Francis himself. For now, however, he’s saying nothing. Meanwhile his brother bishops flounder in strange waters.

In his opening address to the synod last Monday he made it clear that the church’s teaching on marriage was not for changing. His concern was with compassionate pastoral care for the family and his direction to the bishops was “. . . discuss.”

Francis wants candid comment, and in under three minutes! This is strange territory for a great many bishops. It is also something of a leveller. Veterans of many synods find themselves in the same position as rookie bishops there for the first time.

One such is Archbishop Eamon Martin (53), attending his first synod since becoming Archbishop of Armagh in August of last year. He told The Irish Times it was exciting to discover that for so many other bishops, including Cardinal Wuerl of Washington who is attending his eighth synod, “it’s a new experience. I think we’re dealing with a new form of synodality and collegiality at work here”.

Excitement has not necessarily been the response of older peers. Unable to direct irritation at the pope they have found an ideal alternative in the synod’s Instrumentum Laboris, or working document, which they have been discussing as the basis for their final report.

Based on a questionnaire issued to Catholics worldwide and reflections on that, it is an unwieldy, inelegant composite and an ideal whipping boy for frustrated bishops.

It was mercilessly criticised in working group reports last Friday. The Cardinal Collins group described it as “chaotic” and “without inherent logic”. Its text was “flawed or inadequate, especially in its theology”. Members felt “Pope Francis and the people of the church deserve a better text, one in which ideas are not lost in the confusion”.

The group chaired by Archbishop Eamon Martin said of it “the going was very slow indeed at times, and we are left wondering how on earth we will manage to make our way paragraph by paragraph through the entire document before the end of the synod”.