How can Israel be concerned for African refugees and be cold to Palestinians? 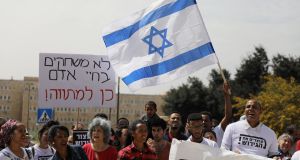 African migrants and Israeli activists demonstrate in support of a new agreement to relocate thousands of African migrants, in Jerusalem on April 3rd, 2018. Photograph: Ammar Awad/Reuters

Last month the Zionist Federation of Great Britain and Ireland held a gala evening in London. It was a joyous event, celebrating 70 years of Israel’s independence, and attended by Marc Regev the Israeli ambassador, but it quickly turned controversial.

The main speaker was the Likud politician Gideon Sa’ar, a former minister for education. During his talk he was heckled by members of the crowd, including a rabbi, who then walked out, followed by others. The reason? Israel’s controversial moves to forcibly deport up to 40,000 refugees from African countries. Opposition to the deportations has galvanised liberal opinion in Israel, leading to rallies and protests, loudly supported by many of its leading writers and intellectuals. The result was an agreement this week to relocate many of them within Israel which prime minister Binyamin Netanyahu appeared to renege on in hours.

It is easy to understand why this refugee situation touches the hearts and minds of so many Israelis: Israel is, after all, a country founded by survivors and refugees. However, you don’t need to be on the Momentum wing of the British Labour Party to experience some cognitive dissonance when trying to understand the position of “progressive” Zionists.

The memory of early Marxist pioneers and the kibbutz experiment has long faded away. Later in the same event, Gideon Sa’ar, according to the Jewish Chronicle, dismissed the prospect of a two-state solution, describing it as “a two-state slogan”. He also said the settlements were “an issue that belongs in the past.” “We have half a million Israeli citizens in the settlements – it is irreversible. And I don’t think it is an obstacle to peace.” Nobody walked out during these remarks. It is important to remember that neither Sa’ar nor the Zionist Congress are on the lunatic fringe – these ideas, and the casual dismissal of a two-state solution, have become mainstream, or perhaps they always were. The question that arises in the European liberal mind then, is, how can Israeli society be so affected by the plight of their African refugees, when the question of millions of Palestinian refugees seems to have disappeared gradually from the agenda?

Could Palestinian refugees be granted at least the same rights as African asylum seekers? Of course not, and for obvious reasons. A few thousand Africans do not represent an existential threat to the state of Israel. Millions of Palestinian refugees and their descendants returning to their homes, would mean the end of the state of Israel as we know it. So the Israeli blind spot in this regard is understandable – particularly for the Irish.

Israel now seems to be confident that its long-term strategic goals are within reach, partly due to its Faustian pact with Donald Trump

Israeli diplomats will fiercely deny there is any equivalence between the Irish and Israeli situation, but sometimes the comparison can be illuminating. Back in the 1980s, I heard Irish writer Colm Tóibín give a talk in which he remarked how, growing up in Ireland of the 1970s, many of the shibboleths and leading ideas of the national narrative could be made true by simply adding one little word, a silent, invisible not. For example, in the Constitution, article 2 stated that “The national territory consists of the whole island of Ireland.” Not. “The Irish language, as the national language, is the first official language.” Not. But the biggest not was the idea that anyone born in Ireland had the right to live and work here, without being forced to emigrate. I told this story to a well-known Israeli writer once, and he nodded in recognition. His own education, he said, had been a normal secular one, with an emphasis on civic duty, ethics and justice, but always, he said, there was an invisible, unspoken clause that an exception to these moral values had to be made sometimes when dealing with the Palestinians.

This was well-expressed once by Shimon Peres in a testy interview with CNN during an Israeli operation in Gaza. Questioned about Palestinians’ rights, he replied that Israel’s survival took precedence over the civil rights of Palestinians. However, Israel’s situation is not as unusual as many would claim. The concept of “mental reservation” is an accepted Catholic idea, once famously wielded by de Valera at a key moment in the history of this State. The reality is that many modern countries, including European ones, are based on a kind of original sin, a period when standard ideas of morality were temporarily put on ice. With Poland and the Czech Republic, it is the postwar expulsion of the German minorities. These historical legacies cannot be discussed in terms of reversal. As Sa’ar says, it’s irreversible.

Israel now seems to be confident that its long-term strategic goals are within reach, partly due to its Faustian pact with Donald Trump. It will have been reinforced in this view by the feeble international response to Trump’s decision to move the US embassy in Jerusalem. The recent United Nations World Happiness Report ranked Israel, astonishingly, as the 11th happiest nation on Earth. The top places were occupied by Finland and the Scandinavian nations, followed by Canada and the Netherlands. It is widely argued that happiness in this sense is related to feelings of political stability, safety and equality. Israel’s ranking at number 11 (ahead of Ireland at number 14) shows that happiness can also be the product of a booming economy, an Iron Dome missile shield and prodigious powers of denial.

Michael O’Loughlin is a poet and writer