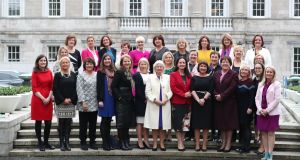 Past and present female members of the Oireachtas gather for a photocall at Leinster House, to mark the occasion of the first working meeting of the Oireachtas Women’s Caucus in November 2017. Photograph: Niall Carson/PA Wire

This year women across the world will be marking International Women’s Day in a very changed world due to Covid-19. Across the globe many women are shouldering the impact of the crises in our health and care system as frontline workers. In addition, women are experiencing a significant increase in domestic violence. The closure of schools and childcare services mean that women are also left with the majority of the care work at home, highlighting the unequal sharing of care responsibilities.

It makes a difference who is in power and who decides. And while leaders across the world have faced challenges in navigating the current crisis, it is notable that women-led countries such as New Zealand, Finland, Denmark, Iceland and Taiwan appear to have fared better in responding to the pandemic. This raises serious questions about traditional ‘male’ forms of leadership and the lack of women at the decision-making tables across the world.

In Ireland there has been progress, in particular following the introduction of gender quotas for general elections, but it is slow and hard-won. Ireland, while in many respects a rising global leader, trails far behind many of our European counterparts and the rest of the world when it comes to women parliamentarians. In the past few months we have tumbled down the global ranking from 93rd to 101st – a woeful marker of the continued absence of women in decision making spaces.

Only 22.5 per cent of our TDs are women, an increase of only one TD since the 2016 election. Forty per cent of newly-constituted Government committees do not have any women, including the Covid-19 committee and the Cabinet health committee. At local level, only 25 per cent of councillors are women, with significant differences between rural areas and urban areas.

In contrast to this, New Zealand prime minister Jacinda Ardern has been a shining beacon of strength and compassion, exemplifying women’s leadership style during this crisis. Globally New Zealand is fourth in representation of women in parliament.

The benefits of having women in decision-making spaces are well documented, not just in politics but in all areas of society. The pandemic highlighted the absence of women at senior level of decision-making in Ireland and it also shone a light on a new age of leadership, one that is being redefined by women themselves. This approach favours a more collaborative and inclusive approach that has been exemplified by women leaders in the pandemic.

But how can we reach the critical mass of women in both local and national government? The National Women’s Council launched-research report Women Doing Politics Differently highlights the benefits of local caucuses as an innovative tool to increase women’s representation at local level and promote cross-party co-operation.

Caucuses can take many different forms, from very formalised to informal spaces for women to come together and discuss key issues affecting them and their constituents. Our research shows that there is significant interest in local caucuses among women councillors from across the political spectrum.

This follows the positive experiences of women involved in the women’s parliamentary caucus in the Dáil and the formation of local caucuses across the country, including Dublin City Council and Limerick City and County Council. Caucuses are a key tool to promote more women in politics. But for local and regional caucuses to work they need support. It is crucial that sufficient funding is being provided to women politicians interested in setting up a local or regional caucus.

Local government is a key pipeline for national office – more than 80 per cent of women TDs have served as local councillors. Increasing women’s representation at local level may also impact positively on women’s representation in the Dáil. This is why, in addition to the promotion of new innovative structures such as caucuses, we urgently need to introduce gender quotas for local election candidates. While more women ran in the last local election than ever before, the two largest political parties, Fianna Fáil and Fine Gael, failed to even run 30 per cent of women as candidates. This is unacceptable and must change.

The persistent absence in decision making places does all of us a disservice. Leadership is evolving, women are driving change, it’s time that our political institutions evolved with them.