‘Parenting would become a gender-neutral activity if referendum is passed’ 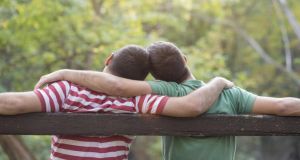 ‘Whatever the outcome of this referendum, the ability and the right of gay couples who love each other to say those words (“I do”) in this way will not change.’ Photograph: Getty Images

The loving relationships that exist between people of the same sex deserve to be protected. From the point of view of the couple, such relationships differ from those of heterosexual couples neither in emotional intensity nor in the depth of their value. They can and do bear witness to the plurality of human relationships which exists in our society.

So far, so very obvious you might say. I agree. But it needs to be stated upfront given the level of misrepresentation and caricature that has occurred to date.

Thankfully not only is this love something we as a society have destigmatised, but it is something that can be celebrated and sealed in the public space since the introduction of civil partnerships.

During that ceremony, contrary to what the Taoiseach (misleadingly) asserted during the Fine Gael Ardfheis, almost 1,500 couples have already said “I do” to each other since 2011 when civil partnership was introduced.

Whatever the outcome of this referendum, the ability and the right of gay couples who love each other to say those words in this way will not change.

There are some things that will change, however, if this amendment to our Constitution is accepted.

Primary among such changes will be the inability of the State to adopt at a future point any particular constitutional or legislative stance in relation to a vision of the family which would prioritise the parental roles of mothers and fathers.

Essentially the State would do this by having implicitly adopted the view that there is no special or added value to a child having a mother or father. It would mean that in law a strict constitutional equivalence must be made between the mother-father model of family and the father-father or mother-mother model which is currently being proposed. Parenting would become a gender-neutral activity.

That such outcomes are being contested is utterly perplexing given that the very amendment we are considering will, if passed, be inserted into the constitutional section entitled “The Family”.

To argue, therefore, that the other articles in that section will somehow be unaffected seems to point not only toward a glaring logical deficit but also toward a view of this referendum as an exercise in legal fiction or constitutional wishful thinking. For me, these considerations go to the heart of why I am opposing the amendment to the Constitution.

It has nothing to do with the ludicrous view that those of us who are calling for constitutional caution are motivated by a thinly veiled homophobia. Such charges, levelled with apparent ease, are barely worthy of serious comment.

I fear that despite what many people feel about the deceptively simple proposition being put to us, that hard legal realities and consequences will be the real outcome of a Yes vote. The very wording and casting of the proposition as an equality issue has been the constitutional equivalent of match-fixing. It has stacked the political deck against those who would plead for a nuanced view.

It deliberately obscured the view that there is in fact no European consensus on this issue and that the highest court in Europe, while it has rejected as non-existent any so called “right” to same-sex marriage, at the same time actively protects those legislative provisions which are in place for LGBT people.

We can do the same here.

Those who advocate a Yes vote unfairly threaten the electorate with the appearance of becoming democratic pariahs if they reject the amendment. This is despite the fact that same-sex marriage in any form has only been adopted by 17 of the 193 member states of the United Nations and none of those adoptions have been on the basis of a constitutional referendum.

Why has this fact been so conspicuous by its absence from the Yes campaign?

There is a deliberate and misleading impression being created that those who advocate a No vote are somehow on the wrong side of history and that only access to civil marriage will do as a defining marker of equality for citizens before the law. This view degrades the concept of equality and empties of it any substantive meaning.

I suspect that as this debate goes forward, more people will come to the conclusion we can protect the rights and responsibilities of gay people and their relationships without redefining the meaning of marriage.

Mattie McGrath is an Independent TD for Tipperary South/West Waterford

Readers are invited to comment on the issue at http://www.irishtimes.com/opinion/have-your-say-should-irish-voters-pass-the-same-sex-marriage-referendum-1.2203859

1 Donald Trump's taxes: US president paid $750 federal income tax the year he won the election
2 Covid-19: Possible extra restrictions for four counties to be decided by weekend
3 Graham Norton: ‘I wanted out, out, out of Ireland’
4 More than 30 people queue overnight to secure property in Carlow
5 ‘I never suspected that, aged 29, I’d be lost’
Real news has value SUBSCRIBE